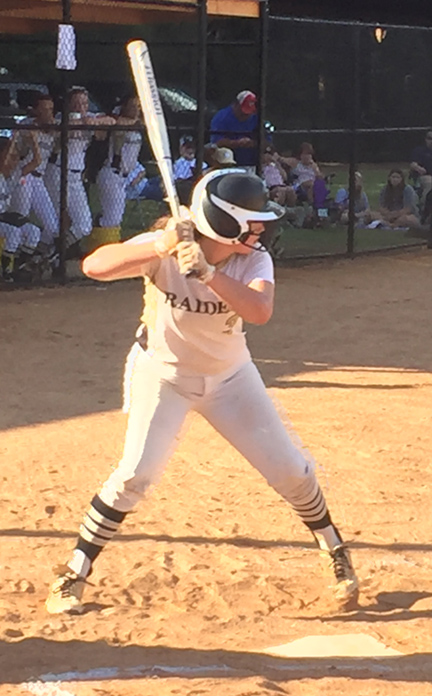 Southland shortstop Holly McCain at bat in the region championship against Valwood. McCain went a combined 2-for-4 at the plate in the two playoff games against Trinity Christian. Photo by Ken Gustafson

DUBLIN, GA – The 2018 Southland Lady Raiders’ softball season came to an end on Saturday, October 13, in Dublin, GA. The Lady Crusaders of Trinity Christian swept the best-of-three series by beating Southland 9-1 in Game 1 and 13-0 in Game 2 in the second round of the GISA Class AAA State Tournament. The Lady Raiders finish the 2018 season at 13-12.

In Game 1, Trinity Christian took the lead in the bottom of the first when a player stole home. The Lady Crusaders scored another run that inning to take a 2-0 lead.

The Southland offense struggled in this game to get anything going on offense. On the other hand, Trinity Christian scored five more runs in the bottom of the second inning to take a commanding 7-0 lead.

The Lady Raiders scored their only run of the game in the top of the fourth. Alli Dent and Holly McCain both singled to begin the inning. Sara Beth Storey then singled to load the bases for Brookland Weaver. Weaver hit a fly ball, but it was not deep enough to score the run from third. Reese Roland grounded into a fielder’s choice, scoring Dent for Southland’s only run of the game.

The Lady Crusaders scored two more runs to wrap up Game 1 with a 9-1 win. The Lady Raiders were only able to get three hits in this game. Alli Dent went 1-for-3. Holly McCain went 1-for-2 and Sara Beth Storey went 1-for-2. Rylan Youngdale pitched a little over four innings. Youngdale gave up nine runs on 14 hits. All of those runs were earned. She walked two batters and struck out none.

The Lady Raiders were hoping to rebound from the loss in Game 1 by winning Game 2 to force a deciding Game 3. Trinity Christian scored two runs in the top of the first, which was nothing that Southland couldn’t overcome. However, the Lady Crusaders once again shut down the Southland offense, allowing only four hits from the Lady Raiders for the entire game. The big damage came in the second and third innings. TCA scored six runs in the second and five in the third to seal the 13-0 win in Game 2, thus winning the series and ending Southland’s season.

McCain and Weaver each went 1-for-2 in Game 2. The other two hits came from Morgan Minick and Abby Lightner. They both went 1-for-1.

Youngdale started off Game 2 as the starting pitcher for Southland. Unfortunately, she gave up five runs on five hits in one inning pitched. She struck out none and walked one batter.

The good news for Southland is that they have no seniors on this team and that everyone will be back for the 2019 season.

“Even though it didn’t end as we wanted, I am really proud of our season,” Southland Head Coach Rusty Tondee said. “Our girls improved from week to week in all phases of the game. All we asked at the beginning was to compete, and we did. We went from fourth in the region to second. We played for the Region Championship and made it to the Elite 8 (State quarterfinals). All were big jumps from last year. Next year is just around the corner.”

GSW Men’s Soccer falls on the road to Francis Marion