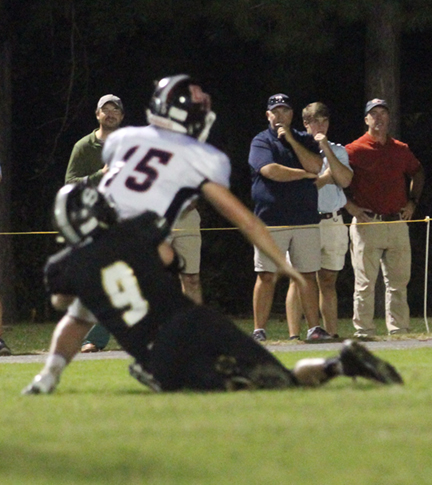 AMERICUS – On a night when 14 Southland seniors played their last regular-season game at Harvey Simpson Stadium, the Raiders of Southland Academy (7-1, 3-0) pulled off another Region 3-AAA victory by defeating the Deerfield-Windsor Knights 14-7 in an extremely hard-fought football game Friday night, October 19.

“Obviously, when these two teams get together, no matter what their records are, you are going to get a grown-boy football game. That’s what this was,” Southland Head Coach Rod Murray said. “All the credit to the guys on the other side (Deerfield-Windsor). They played hard. We’re thankful for the seniors that we’ve got. It was a group effort to get this job done. We’re going to get healthy and get ready to play next week, but it was a big win for our program and a big win for our Southland family.”

Deerfield-Windsor got on the board first. The Knights moved the ball to the Southland 40-yard line. Then quarterback Jack Kimbrel threw a 40-yard pass to Finley Davis for a touchdown. The extra point by Parker Orlowski was good, giving the Knights a 7-0 lead. 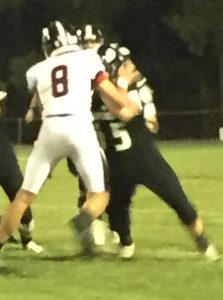 However, the Raiders struck right back as they moved the ball towards midfield. On 3rd-and-2 from the Southland 49, quarterback Landon Law gave the ball to Parker Weldon, who scampered 51 yards for a touchdown. Zane Hines’ extra point attempt was good, and the score was tied 7-7 with 7:31 left in the first quarter.

The Knights were able to move the ball down into Southland territory. They converted on 4th-and-2 and then gained first-down yardage on 3rd down. However, the Southland defense was able to force the Knights into a 4th-down situation. Kimbrel threw a long pass towards the end zone, but it was out of the reach of his wide receiver, giving the ball back to the Raiders on downs. 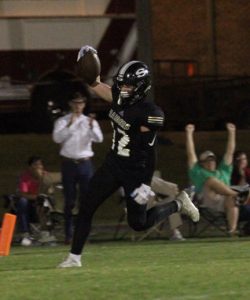 Near the end of the first half, the Knights were trying to strike back. However, Kimbrel’s long pass was intercepted by Luke Law inside the Raiders’ 20-yard line. This enabled Southland to go into the locker room at halftime with a 14-7 lead.

The Raiders were driving into DW territory in the second half, but running back Clay Owens fumbled, and the ball was recovered by the Knights. The Raider defense was able to hold Deerfield-Windsor’s offense on their ensuing drive and get the ball back. Southland once again moved the ball deep into the Knights’ territory. However, the Knights forced another fumble, and the ball was recovered by Garrett Smith of Deerfield-Windsor. This gave the DW offense a golden opportunity to tie or take the lead. However, the Raider defense stopped the Knights and the ball was turned over on downs. Southland was unable to move the ball on offense and was forced to punt. There was a bad snap on the punt, and Zane Hines had to run back and get the ball. He was able to get a rugby-style punt off that made it to midfield. However, the Raider defense, as they had done all night, came up with another big play. This one sealed the game. Kimbrel’s pass was intercepted by Weldon to seal the 14-7 win.

Southland improves to 7-1 overall and they are tied for first place with Tiftarea Academy at 3-0. In GISA Region 3-AAA. That will set up a region championship game as both schools will square off on Friday, November 2, at Tiftarea Academy. It will be the Raiders’ final regular-season game.

Before then, however, the Raiders will make another trip to the Atlanta metro area to take on Creekside Christian Academy in McDonough, GA on Friday, October 26. Kickoff is scheduled for 7:30 p.m.

Panthers fall to the Syrupmakers