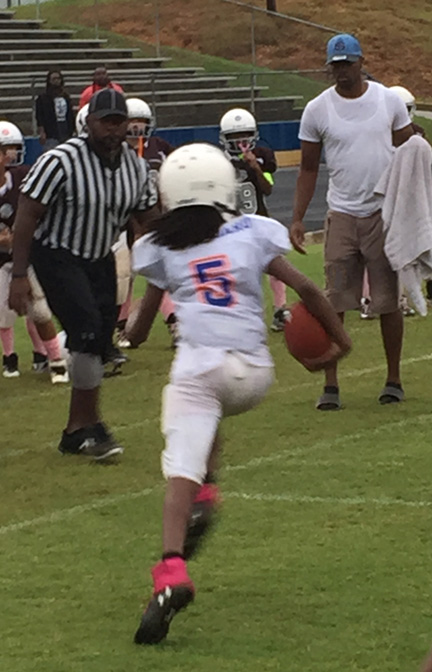 Florida running back Amari Hubbard running with the ball. Hubbard scored a touchdown in the Gator’s loss to the Crimson Tide in the championship game of the 9-10-year-old division. Photo by Ken Gustafson

AMERICUS – It was on days like Saturday, October 20, that dreams of playing high school football and beyond begin for kids ages 5-12 years old. The Sumter County Parks & Recreation Department held their annual “Super Saturday” football games at Alton Shell Stadium on the campus of Americus-Sumter High School. 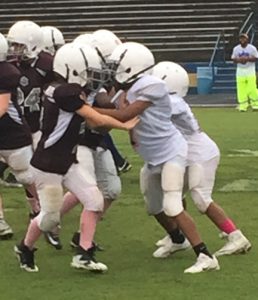 The Crimson Tide’s Sterling Blanchard blocking a Florida player in the 9-10-year-old championship game between the Bulldogs and the Gators.
Photo by Ken Gustafson

The first game consisted of players ages five to six-years old. All of the players from the teams in that division got to play on the stadium field. “We have a non-competitive policy with the five and six-year olds,” SCPRD Director Tim Estes said. 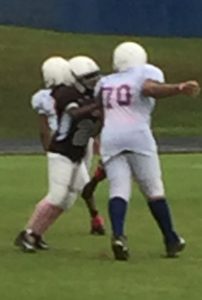 The next two teams to take the field were the top teams from the 7-8-year-old division. It was the Georgia Bulldogs, coached by Brandon Sims, against the Florida Gators, coached by Calvin Wright. It was an extremely hard-fought game between both teams, but the Bulldogs came out on top 14-0. Alex Brown and Tyran Smith scored touchdowns for the Bulldogs. “I think our guys played really hard today. It was a really sloppy game today. We couldn’t execute like we normally do,” Coach Sims said. “We’re glad that we were able to come out and get the win and have fun.” Even though the Gators lost the game, head coach Calvin Wright was pleased with his team’s effort and that they had fun playing. “Our guys did a good job. They played hard and I’m proud of them, every last one of them” Wright said.

Up next was the championship in the 9-10-year-old division between the Alabama Crimson Tide and the Florida Gators. This was a very close game throughout. Florida running back Amari Harper opened the scoring with a 50-yard run for a touchdown. The extra point was no good, but the Gators took an early 6-0 lead. 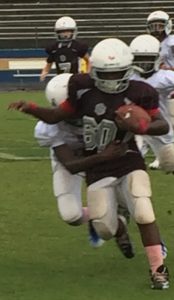 The Crimson Tide’s James Harper running with the football against the Gators.
Photo by Ken Gustafson

Alabama responded with a touchdown from Jaylen Brown. The extra point was good, and the Crimson Tide took a 7-6 lead.  Alabama added to their lead when Ishmael Jones made a defensive play. Jones took the ball away from the Florida running back and scored a touchdown. Brown scored the PAT for the Tide, and Alabama enjoyed a 13-7 lead.

The Crimson Tide added to their lead when Brown scored his second touchdown of the day. The extra point attempt was no good, but Alabama enjoyed a 19-7 lead. Florida tried to get back in it as running back Aaron Kearse scored a touchdown for the Gators to make it 19-13 Crimson Tide. However, Alabama held on to win the championship. “I’m really proud of our kids. They played extremely hard. They executed and did what we as coaches asked them to do,” Alabama Head Coach Reggie Jones said. 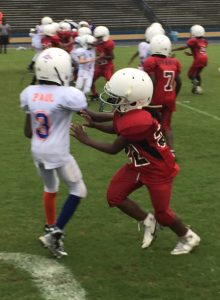 Florida’s Malik Paul (3) and Georgia’s Jambrious Bullard (22) blocking each other during the 7-8-year-old championship game.
Photo by Ken Gustafson

The last game of the day was in the 11-12-year-old division. It was the Georgia Bulldogs against the Florida Gators. This too was a hard-fought, intense game between two championship-caliber teams. However, the Bulldogs came out on top 14-0. Anthony Tyson scored on a long touchdown run to give Georgia an early 6-0 lead. The PAT by Quinton Tyner was good, and Georgia had an early 7-0 lead. Later in the game, Jakory Wise scored for the Bulldogs. The extra point by Tyner was good, and Georgia went on to win the championship 14-0. 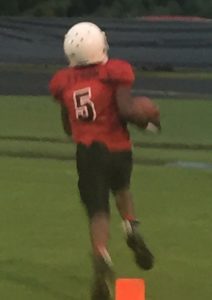 Bulldogs running back Anthony Tyson scoring a touchdown in the 11-12-year-old championship game. The Bulldogs went on to win 14-0.
Photo by Ken Gustafson

In a few years, it will be safe to say that some of these players will be on this field again, but at that time, they will be dressed in the blue and gold of Americus-Sumter. Some might be playing for Southland, while others will don the black and white of Schley County. One thing is for sure: the dreams of playing in high school, college and the NFL are beginning when the kids get to play in the local high school stadium.