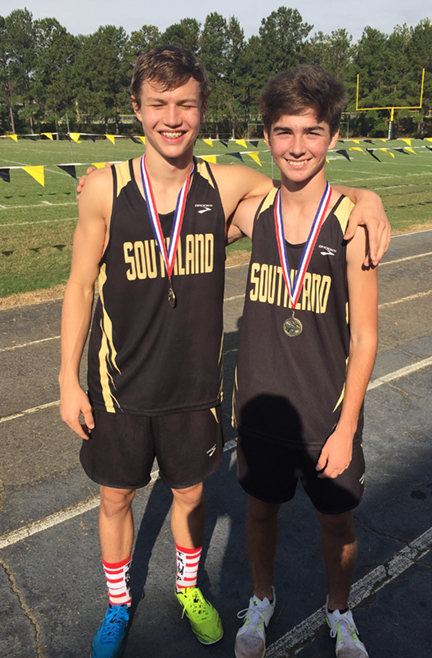 On the boys’ side, the Raiders finished in third place with a total time of 1:44:06.77 and an average time of 20:49.36. Deerfield-Windsor won the team competition and finished first in Region 3-AAA with an overall time of 1:29:35.71 and an average time of 17:55.15. Both Max Foster and Tanner Humphrey of Southland finished in the top 10, thus qualifying for the state meet individually. Deerfield-Windsor’s Porter Hill won the race in a time of 17:06.78. 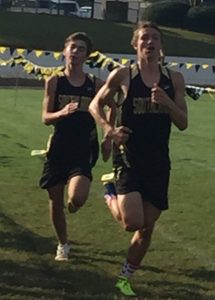 The top four teams in the region qualify for state. Being that the Southland boys’ team finished in third place, all of the Southland male runners who competed in the Region 3-AAA Meet are eligible to compete in this Saturday’s state meet, which will be held at Southland Academy.

Foster and Humphrey crossed the finish line in seventh and eighth place respectively. In fact, Humphrey was right behind Foster as they crossed. Foster finished in a time of 18:51.06 and Humphrey finished in a time of 18:51.84. “I wanted to break the top five, but obviously, I didn’t do that,” Foster said. “My hips were hurting a little bit so I wasn’t 100 percent. I was going to go out slower and get faster as I went along. Usually, I start out too fast and get slower. I guess I didn’t save enough energy or pace myself correctly, but I did make a PR (personal best) for this course.” 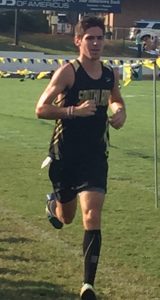 Tanner Humphrey, who finished right behind Foster, finished the race with a personal best. “My strategy was to stay with my teammate, Max Foster,” Humphrey said. “We pretty much just stayed together and we tried to pass one person at a time and go as fast as we could.” The course and the competition really didn’t bother Humphrey, mainly because this is Southland’s home course. “It was a little difficult because we have the hill, but it wasn’t too terribly bad because we practice on it all week,” Humphrey said.

Gabe Roland also turned in a strong finish for the Raiders. Roland finished the race in a time of 23:02.44. Matthew Peck finished just two spots behind Roland in a time of 23:24.25. Peck didn’t make his personal best time, but he got pretty close. “I really wanted to keep a solid pace and I tried changing forms to see what would work on the best terrain,” Peck said. “I usually do that for practice, but I learned that my form was bad. I found a new form, and it helped me speed up tremendously.”

Southland runner Gabe Roland crossed the finish line with a time of 23:02.44 at the GISA Region 3-AAA Meet.
Photo by Ken Gustafson

Peck went on to say that Coach Ed Shattles told him that his form was wrong and showed him how to run with the correct form. “He (Shattles) told me how I was doing it wrong and that I was folding my arms too close, so I spread them out some more and it made me go about as twice as fast as I was going before.” Hunter Hockman ran a personal best. He finished in a time of 24:25.12. “I wanted to make sure I didn’t tire myself out by doing too many workouts before I went into the race,” Hockman said. “The hardest part was coming down the final stretch. I was just so tired from the rest of the race.”

Southland’s Matthew Peck crossed the finish line in a time of 23:24.25 at the GISA Region 3-AAA Meet.
Photo by Ken Gustafson

Southland freshman Elizabeth Law (third from far left) finished in third place in the region meet. Law finished in the top 10 individually, qualifying her for the state meet.
Photo by Ken Gustafson

Law was the only Southland female runner to qualify for the state meet. One surprising entry into the girls’ race was Reese Roland. Roland has been playing Softball for Southland and has not been running cross country this year, though she has run cross country for the Raiders in the past. The coaching staff asked Roland if she would run in the Region 3-AAA race because they needed a fifth runner. She agreed. Considering that she hadn’t been practicing with the team during this season, Roland turned in a pretty decent time. She finished with a time of 28:45.69, putting her in 27th place. “I haven’t run at all this year. I actually quit cross country,” Roland said. “They needed another runner, so I decided to run.” Each team needs five runners to fill out a team. Jadie Burrell finished in 18th place with a time of 25:19.52, a little under two minutes behind tenth-place finisher Anna Plowden of Deerfield-Windsor. Plowden finished in a time of 23:32.69 and claimed the 10th and final individual spot in next Saturday’s state meet.

“I was just going to try my hardest just to keep on going and do the best I could,” Burrell said. “ 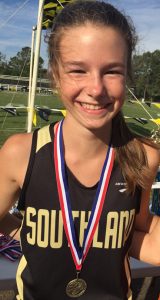 Close-up of Elizabeth Law with her third-place medal.
Photo by Ken Gustafson

For the Southland girls’ team, there is a lot of potential for greatness in the future. Elizabeth Law is only a freshman and has already qualified for the state meet. Jadie Burrell, also a freshman, was a little less than two minutes from qualifying for state. 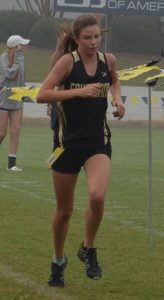 Ella Arnold, an eighth grader, was a little less than four minutes off the 10th spot. She will grow into a stronger runner in the future. Bentlee Roberson, who finished right behind Arnold, is as junior. With a good off-season of hard training, Roberson has a good chance to qualify for state her senior year.

On the boys’ side, Tanner Humphrey and Max Foster qualified for the state meet this year individually. Humphrey is an eighth grader, while Foster is a sophomore. Both have more years to improve as runners. 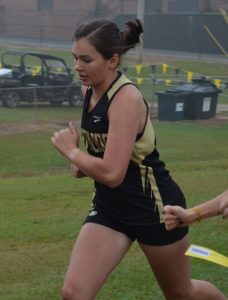 Southland’s Jadie Burrell running in the region meet. Burrell had a strong finish with a time of 25:19.52.
Photo by Carol Burrell

Both Matthew Peck and Hunter Hockman are freshman and have three more years to excel as runners. Both Gray Torbert and Gabe Roland are seniors. They will both have a chance this Saturday to finish their final seasons on a high note in the state meet. Being that the Southland boys’ team finished in third place in the team standings, all of these runners who competed in the Region 3-AAA Meet will compete in the state meet, which will give the younger runners added experience. The Southland cross country program has great years to look forward to. 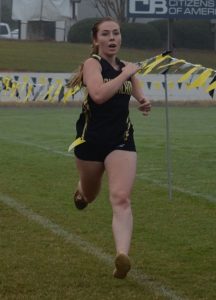 Southland’s Bentlee Roberson running in the region meet. Roberson finished strong with a time of 27:22.81.
Photo by Carol Burrell

However, there is the here and now. Tanner Humphrey, Max Foster, Gabe Roland, Hunter Hoffman and Gray Torbert will carry the hopes of a state championship at the GISA Class AAA State Meet to be held at Southland Academy Saturday, October 27, at 10:20 a.m. The girls’ state meet, also to be held at Southland, will begin at 9 a.m. Elizabeth Law will carry the hopes for an individual state championship for the Lady Raiders.