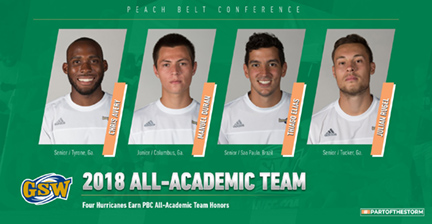 The Hurricanes had two players make the PBC All-Academic Team for a third time. They are senior Chris Avery, a Communication & Media Arts Major, and senior Julian Rugel, an Exercise Science Major. Junior Manuel Duran, an Engineering Major, made his second appearance on the team, while senior Thiago Elias, a Management Major, received his first nomination after transferring to GSW.

To qualify for the PBC All-Academic Team, a student-athlete has to have participated in at least half of his or her team’s events and be either a starter or a significant contributor. They also have to achieve a cumulus 3.30 cumulus GPA on a 4.0 scale and they must have completed one academic year at his or her current school. They also have to be at least a sophomore.