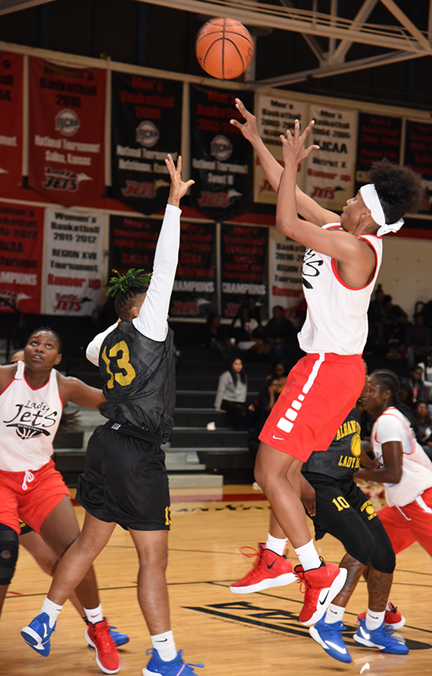 “We started out very slow. We played in spurts. Then in the final minutes of the game, we did not execute and Albany State did,” SGT Head Coach James Frey said. “There were some positives in this game, but it also showed us some things that we really need to work on before we open the regular season.”

The Lady Jets fell behind early and were down 13-7 by the end of the first quarter. However, SGT came on strong in the second quarter and outscored Albany State 22-6 to take a 31-19 halftime lead. 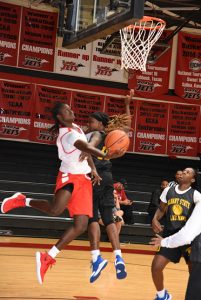 Fatou Pouye, 12, a sophomore from Kaolack, Senegal, came away with 11 points against Albany State.  She is shown driving under the basket for a reverse layup.
Photo by SGT

ASU rallied to outscore the Lady Jets 19-16 in the third quarter. However, SGT still led 45-38 by the end of the third. However, in the fourth quarter, Albany State outscored the Lady Jets 18-11 and tied the game 56-56 at the end of regulation. Both teams played a five-minute overtime period to decide a winner.

In overtime, ASU outscored South Georgia Tech 9-4. The Lady Jets also missed some crucial free throws down the stretch, which proved to be a factor in the outcome. “We were 7 of 17 from the foul line,” Coach Frey said. For the game, the Lady Golden Rams were 23 of 44 from the foul line.

The Lady Jets have two more scrimmage games before the regular season begins. They will host Thomas University on Saturday, October 27, at 2 p.m. They will then host Middle Georgia Prep on Monday, October 29, at the Hanger. It begins for real for SGT when they travel to Gainesville, FL to take on Santa Fe College on Thursday, November 1. Tip-off for that game is scheduled for 6 p.m.