AMERICUS — A “Who’s Who” of local educators, business leaders, concerned citizens, and politicians from throughout Sumter County gathered Tuesday evening at the John Pope Industrial Technology Center on the campus of South Georgia Technical College for the second-annual State of Education Dinner to discuss education in Sumter County. The event was presented by the Sumter County Chamber of Commerce.
A networking reception began at 5:30 p.m., followed by dinner at 6 p.m. George Wall, a senior at Southland Academy, led the invocation, followed by the pledge of allegiance. After that, the discussion forum commenced. The panelists were Neal Weaver, Ph.D., president of Georgia Southwestern State University; John Watford, Ed.D., president of South Georgia Technical College; Torrance Choates, Ed.D., superintendent of Sumter County Schools; Ty Kinslow, headmaster of Southland Academy; and Elizabeth Kuipers, Ph.D., principal of Furlow Charter School.
The forum focused on education in Sumter County and how educators and the local business community can work together to help students thrive once they enter the workforce. Don Porter, a local manager for Georgia Power, was the moderator. He asked nine questions of the panelists, and at least two panelists answered each question.
Question No. 1: “In your opinion, how are schools working together in Sumter County to maximize the student experience and educational opportunities in our community?” This question was directed to Choates and Kinslow.
Choates: “The Sumter County School System has an extensive professional development plan in which our leaders constantly work together to try to gather ways to enhance the academic achievement of all. One of the things that we’re doing, which is new this year, is reaching out to all of the churches in the community. One of the goals that we have is to try to get a church to mentor each grade level. We think that churches have a lot they can offer. The churches can reach students and parents that we can’t reach.” 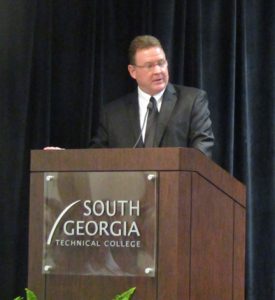 By Beth Alston AMERICUS — It was a great two-day event, in spite of some weather that moved in late... read more