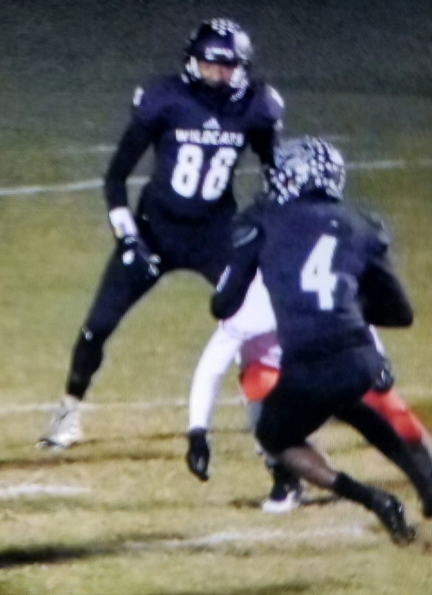 Schley County running back Tra Sampson with the football. Sampson scored the first touchdown of the game in the Wildcats’ 45-0 win over St. Anne-Pacelli. Photo by Kricket Barineau

ELLAVILLE – The Schley County Wildcats (8-1, 5-0) are now one step away from a historic accomplishment: winning a region championship. They thrashed St. Anne-Pacelli 45-0 in a Region 4-A-Public crossover game Friday night, October 26, at Schley County High School.

The Wildcats will now turn their attention to next week’s Region 4-A-Public Championship Game at Marion County. Schley County lost to Marion County in the first game of the season by the score of 28-7 on Friday, August 17, in Buena Vista. The Wildcats have never won a region championship in football. They are now one win away from making that accomplishment a reality. They are ready for the rematch with a lot on the line.

Running back Tra Sampson opened the scoring by scoring a touchdown from eight-yards out. The extra point by William Blackwell was good, giving the Wildcats an early 7-0 lead.

Quarterback Garrett Peavy then added to Schley County’s lead by throwing a 62-yard touchdown pass to Zamon Ross. Blackwell’s extra point was good, and the Wildcats increased their lead to 14-0.

The Schley County defense stifled St. Anne-Pacelli’s offense all night. The Wildcat offense got another touchdown when Peavy threw a 10-yard pass to Jamyron Clayton. Blackwell’s kick was no good, but Schley County owned a 20-0 lead. Later on, Zamon Ross scored his second touchdown of the night on a 23-yard run from scrimmage. The extra point attempt by Blackwell was missed again, but the Wildcats enjoyed a 26-0 lead.

The Wildcats moved the football down into SAP territory once again. This time, Schley County Head Coach Darren Alford decided to give the ball to running back Trent Bivins, and Bivins did not disappoint. Bivins scored a touchdown from four yards out to give the Wildcats a 32-0 lead. Lucas Sellers came in to attempt the extra point, but the kick was no good.

Schley added another touchdown when Peavy threw a 19-yard pass to Jakim Hart. Sellers’ extra point try was no good, but the Wildcats led 38-0. Schley County capped off the game with their final touchdown of the night. The Wildcats, as they had done all evening, moved the ball at will against the Vikings. The Wildcats moved the ball down to the four-yard line. Then Landon Dailey scored from four yards out. Blackwell was put back in to try the extra point. This time, he made it. The Wildcats defeated the Vikings 45-0.

This sets up a historic opportunity for Schley County. They will travel to Marion County next Friday, November 2, to compete for the Region 4-A-Public Championship. The Wildcats have more than assured themselves a spot in the state playoffs, but the Wildcats want to be the first football team in school history to win a region championship.

During last summer’s workouts, Coach Alford told the team that they have what it takes to finally break through. They will have their opportunity next Friday in Buena Vista against the undefeated Eagles (9-0, 5-0). Kickoff is scheduled for 7:30 p.m.

AMERICUS – On Friday, October 26, over 100 athletes from Sumter, Dooly, Taylor and Lee Counties gathered at the Storm... read more