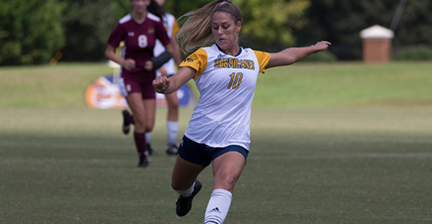 GSW senior Shelbie Mills, a midfielder from Newnan, GA, played in her final match as a Lady Hurricane on Saturday, October 27. Photo by GSW

AMERICUS – The Georgia Southwestern State University women’s soccer team was hoping to send their seniors out on a winning note. However, the Lady Bearcats of Lander University thwarted the Lady Canes’ effort. Lander defeated GSW 3-1 on Saturday, October 27, at Hurricane Field.

It was Senior Night for the Lady Hurricanes. Ella Hawkins, Rachel Cochran, Shelbie Mills and Avery Heid played in their final match for Georgia Southwestern State.

The Lady Bearcats got on the board first when Chloe Le Franc scored at the 8:39 mark of the first half. Lander struck again at the 38th minute when Juliette Vidal scored off an assist from Kylee Eppi to give the Lady Bearcats a 2-0 lead. However, it was Senior Night at GSW, and the Lady Hurricanes would not go quietly. In the 41st minute, Eduarda Giusti passed the ball inside to Ashlyn Baker. Baker then tapped the ball in between two Lander defenders for a goal to cut the deficit to 2-1 at halftime.

Unfortunately for GSW, they were not able to get the equalizer. Instead, the Lady Bearcats increased their lead back to a two-goal advantage when Emily Jermstad scored at the 68:41 mark of the second half. That goal sealed the victory for Lander.

The Lady Hurricanes finish the season at 3-14 and 0-10 in the Peach Belt Conference.