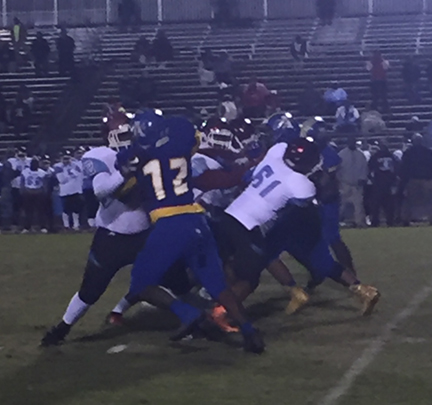 ASH defensive lineman Demarqu Myers trying to shed his blocker and make a play on defense. Photo by Ken Gustafson

AMERICUS – The Americus-Sumter Panthers (3-7, 3-5) came ready to finish out the season Friday night, November 2, against Carver (Columbus) on Senior Night at Alton Shell Stadium. They were prepared to send their seniors out on a high note. However, Carver running back Khiari McCoy scored three rushing touchdowns to lead the Tigers to a 40-19 win over Americus-Sumter.

A key turnover in the fourth quarter was also a factor in the Panthers’ loss.

Carver (Columbus) scored first. They moved the ball down inside the ASH 20-yard line. Then running back Khiari McCoy scored to give the Tigers a 6-0 lead. They tried to go for two, but the two-point conversion failed. The Tigers struck later in the first half when McCoy scored his second touchdown to give Carver a 12-0 lead. They went for two again, but the conversion attempt failed. Neither team was confident in their kicking game. 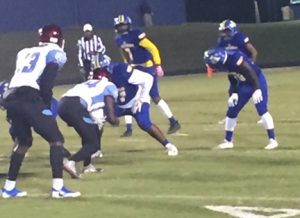 Kanova Willoughby (7) playing quarterback for the Panthers in the first half. Willoughby rotated with KJ Harvey at quarterback.
Photo by Ken Gustafson

However, the Panthers would strike back. At one point in the first half, the Panthers were backed up deep in their own territory at their own 12-yard line. On third-and 20 from the 12, quarterback KJ Harvey threw a long completion to Lemario Larry. The Panthers continued to move the ball down into Carver territory. Harvey connected with Larry again for another long reception. The Panthers eventually moved the ball down to the one-yard line, then Harvey scored on a quarterback keeper to make the score 12-6 Carver. ASH went for two, but the attempt was no good.

However, The Panthers forced a fumble and recovered, giving them a chance to mount a drive and score. They did just that by moving the ball down inside the Carver 20-yard line. Harvey finished off the drive by throwing a touchdown pass to Sam Crumbley in the corner of the end zone to tie the score at 12-12. The Panthers tried a two-point conversion once again, but it failed. Nevertheless, they would head into halftime tied 12-12. 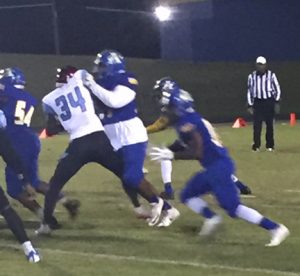 In the third quarter, the Panthers had the ball on offense. They tried an end-around with Lemario Larry throwing the ball. However, Larry threw an interception to Carver defensive back Jarius Thomas, who ran the ball back the other way for a touchdown for the Tigers. As they had done all night, The Tigers went for two, but the two-point conversion attempt failed. However, Carver (Columbus) led 18-12 by the end of the third quarter.

Neither team could mount a drive for the first few minutes of the fourth quarter, However, Carver quarterback Jaylen Joyner threw a pass to Jacyais Credle, who ran the ball all the way down close to the goal line. McCoy then scored his third touchdown of the night. The two-point conversion was no good, but Carver had extended its lead to 24-12.

However, the Panthers struck back. Americus-Sumter had the ball at their own 20-yard line. Harvey threw a pass to Quevolia Willoughby, who scampered 74 yards and was tackled just shy of the goal line. A few plays later, Harvey found Larry in the end zone for a touchdown. This time, Coach Larry Harold elected to try an extra point. The extra point by Kevin Abarca was good, and the Panthers only trailed 24-19 with about 5:30 left in the game. 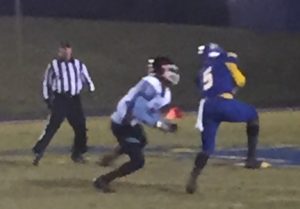 Carver (Columbus) took advantage of the mistake and moved the ball down to the ASH 25-yard line. At this point, the Tigers were trying to run out the clock and salt away the victory. Jaylen Joyner scored on a quarterback keeper to make the score 30-19. The two-point attempt was good, making it 32-19.

On the Panthers’ last possession, Harvey was trying to throw the ball, but it slipped out of his hands and the ball was recovered by Treyvon Evans, who ran the ball back for a touchdown. The two-point attempt was good, making the final score 40-19 Carver (Columbus).