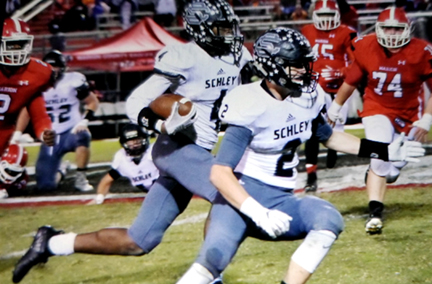 BUENA VISTA, GA – The Schley County Wildcats stood at the door of history Friday night. If they were to win their final regular-season game at Marion County, they would win the Region 4 Class A-Public Championship, something that had never been done in the history of Schley County High School football.

Neither team scored in the first quarter. However, Marion County got on the board first when running back Travon Matthews scored from three yards out to give the Eagles a 6-0 lead. Wilfredo Vail-Mendez converted the extra point, making it 7-0 Marion County with 3:04 to go in the second quarter.

Just before the quarter ended, Marion County increased their lead when Matthews scored his second touchdown of the night. This one was a 21-yard run from scrimmage. Vail-Mendez’s extra point was good, giving the Eagles a 14-6 lead.

The Wildcats were unable to score anymore points against the Marion County defense, and with 6:14 left in the game, the Eagles put the game away as quarterback Trice McCannon found Josh Rodgers in the end zone for a five-yard touchdown pass. The extra point by Vail-Mendez was good, and Marion County defeated the Wildcats 21-6.

In spite of the loss, the Wildcats have more than assured themselves a good seed in the state playoffs. Their is a strong possibility that the Wildcats wii get a first-round bye next Friday if they finish in the top 8 in the power rankings.  One thing is for sure. They will be in the state playoffs. Date, time and place are still to be determined.

By Staff Reports   CHULA, GA – The Raiders of Southland Academy came into Chula, GA poised to win the... read more