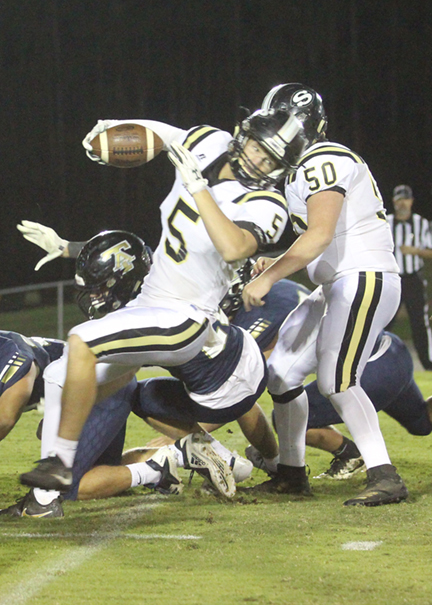 Southland running back Parker Weldon running with the football against Tiftarea. Photo by Sheri Bass

CHULA, GA – The Raiders of Southland Academy came into Chula, GA poised to win the Region 3-AAA Championship by defeating Tiftarea Academy. However, Erik Soliday’s club found a way to neutralize Southland’s offense and defeat the Raiders 28-13 to win the region championship.

Soliday, who coached Americus-Sumter for several years, resigned last spring and is coaching at Tiftarea Academy (11-0, 5-0).

Southland got on the board first with 1:14 to go in the first quarter. Quarterback Landon Law threw a 56-yard screen pass to Luke Law. This set up Southland’s first score of the game. The Raiders were able to move the ball down to the two-yard line. Running back Parker Weldon scored from two yards out. The extra point by Zane Hines was good, and Southland had an early 7-0 lead.

However, the Panthers struck back. Quarterback Logan Crosson threw a 15-yard touchdown pass to Casen Royal. The Panthers went for two points, and converted to take the lead 8-7.

With 8:18 left in the first half, the Panthers added to their lead when Crosson threw a 22-yard touchdown pass to make the score 14-7. The Panthers again decided to go for two, and they converted, increasing their lead to 16-7. 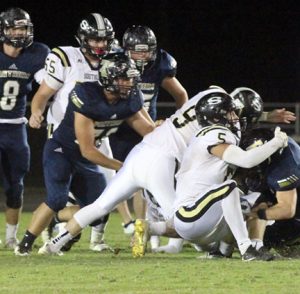 The Panther defense stifled the Southland offense throughout the game. In the Fourth quarter, the Panthers increased their lead. With 10:27 to go in the game, running back Spence Massey scored a rushing touchdown from two yards out to increase Tiftarea’s lead to 22-1. They went for two once again, but this time, they failed.

Southland tried to get back in the game when running back Clay Owens ran 20 yards for a Raider touchdown, cutting the deficit to 22-13 with 7:02 to go. The Raiders went for two, but the attempt failed.

Then with 3:23 to go in the game, Tiftarea salted away the victory and the region championship when running back Adam Mckinney ran the ball 21 yards for a touchdown. The two-point conversion attempt was no good, but it wouldn’t matter as Tiftarea Academy won the game 28-13 and won the Region 3-AAA Championship.

Despite the loss, Southland (8-2) will still be in the GISA Class AAA State Playoffs. They will host Westfield in the first-round next Friday night, November 9, at 7:30 p.m.