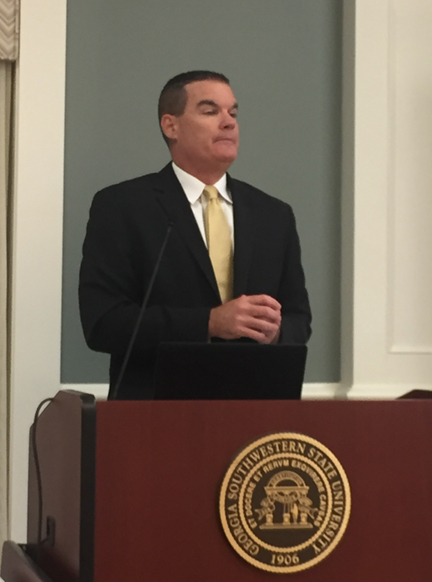 GSW Director of Athletics Mike Leeder speaking to the Sumter County Chamber of Commerce about how the Chamber can help the cause of the Hurricanes’ intercollegiate athletic programs, as well as hosting additional high school state championship events. Photo by Ken Gustafson

AMERICUS — Members of the Sumter County Chamber of Commerce gathered at the Marshall Pavilion dining hall at Georgia Southwestern State University (GSW) for the Chamber Luncheon to hear GSW Director of Athletics Mike Leeder speak about boosting the profile of the GSW Athletic Department. He also explained how the Chamber of Commerce, along with the rest of the community, can help the athletic department do that by helping to bring in additional high school state championships in addition to what GSW already hosts.

Leeder began his speech by mentioning that GSW started a summer basketball camp a decade ago. “Sometimes, it’s the first step,” he said. “It’s great that it was started and it’s something that we will continue to grow as long as there is consistency in the programming. To continue to try and grow it … is great.”

Leeder went on to mention the “long week” last week, referring to the World Series. He had been the men’s basketball coach for 13 years before he became athletic director. “Neither of my children gravitated to basketball. One became a cheerleader and a dancer, and the other plays baseball,” Leeder said. “I started to appreciate baseball more than I did when I was younger. As I was watching the World Series last week, sometimes, those games went on and on,” he said. “It reminds me of a story about how intercollegiate athletics can be a unifying and life-long connector.”

With that, Leeder told a funny story about two close friends who grew up playing baseball together in a small town. “They were both pitchers,” Leeder said. “They came up in a small town and they were both successful. One was a little more successful than the other. They both had nice careers in high school and moved on in life.” He said they lost contact with each other. “They moved off for jobs and they moved off for families.” However, much later in life, the two friends came back to their original hometown and reconnected with each other. “Their connection was over baseball,” Leeder said. “As their children moved on, and it was just them and their spouses, they spent a lot of time together reminiscing about their experiences as baseball players. They both started to wonder if there would be baseball in Heaven,” Leeder said. He said that once the lives of these two friends ended, they both hoped that they would be pitchers in the afterlife. “They had a lot of conversations about that … They both made a deal. They said that the first one that goes would somehow let it be known to the other that was still living whether or not there is baseball in Heaven.” Leeder said both friends agreed.

“As the years went on, one of the friends became sick, and it was obvious that he was not going to live much longer,” Leeder said. “His friend came to visit him in the hospital for potentially the final time. He reminded his dying friend that when he died, to let him know whether or not there is baseball there. His friend said that he would let him know somehow.”

With that, Leeder moved on to the more serious issue about the upcoming Georgia Independent School Association (GISA) events to be held at GSW, such as the Baseball All-Star Game, the GISA Softball All-Star Game, a cheerleading event, the State Wrestling Matches and the State Basketball Regionals and Final Four. “There’s going to be a unique opportunity here at the end of February,” he said. He told the crowd assembled that there is a glitch in the schedule at Mercer University this year. Up until this year, Mercer had been hosting both the GISA State Semifinals and Finals in both boys’ and girls’ basketball. However, Leeder said that GSW has an opportunity to host both championships in Americus. “We think it’s going to be outstanding,” he said. “It will have a significant economic impact. It will be an opportunity to help us with our enrollment, but what it’s going to really give us is an opportunity, with the door being cracked, to kick the door in.” He said the university wants to do such a good job with this event that the GISA will not want to go back to Mercer. “We want the GISA to be so impressed that they will want to make GSW their permanent home,” Leeder said. “We are a little bit challenged geographically due to the fact that the GISA would like to keep the event more centrally located in the state, but I would like to ask for you, as the chamber, to consider partnering with GSW concerning this matter.”

Leeder said he and other GSW officials plan to meet with John Dorminey, the athletic director for the entire GISA, to discuss moving the boys’ and girls’ basketball state semifinals and finals to GSW on a permanent basis.

“There is a cost to doing this,” Leeder said. “We are looking for partners and how we can make sure that when the GISA goes back, and they decide where they’re going to have the Final Four for years to come, that Georgia Southwestern is a viable option.”

Leeder said he would like for the Sumter County Chamber of Commerce to “kick around” the idea of putting together a package that is attractive enough to the GISA to keep them here on a permanent basis. “All of the events that we’ve hosted have resulted in the hotels and restaurants being full. There is a lot of foot traffic that has resulted from GSW hosting these events,” he said. “As I’ve been here for 16 years now, the one thing I constantly here is ‘The campus and the community have to work together.’ There’s no question about that.”

Leeder said these types of events can only bring GSW and the community together, and that they can help drive the economic engine. He also talked about how much service that GSW student-athletes have done in the community, so much so that the school has been nationally recognized for this. “There are over 300 NCAA Division II schools in the country. A lot of them are regional public institutions like GSW,” Leeder said. “Right now, we sit ranked No. 2 out of all of them in the community service hours generated by our student-athletes. We have over a 91 percent participation rate from our student-athletes in terms of their execution of those community service hours, and we are close to 4,000 hours generated each year from the athletic department going back to the Americus community,” Leeder continued.

He also said it’s important to form partnerships in bringing more events to GSW. “Not only does it bring the community and campus together, but it’s a chance for … long-term economic development,” Leeder said.

Leeder asked the chamber members for help in making these goals a reality. “We can’t, as a university, provide all of the costs to put these events on,” Leeder said. “If we don’t have partners, it would be difficult to see this happening every year.”

Leeder said he would be more than happy to come sit down and talk with each chamber member individually as to how these goals can become a reality. He said  the level of community service of GSW will increase. “We certainly appreciate the opportunity to get out in the community and have our community meet the student-athletes,” Leeder said. “Less than one percent of our student-athletes come from Americus. I always try to advocate for our student athletes. Our student-athletes are the best recruiters we have.”

At that point, Leeder opened the door for questions. One person asked what the Canes 360 Program is about. Leeder responded that the GSW Athletic Department looked at a way to help people get more involved by coming out to see what GSW athletics is all about. “The number 360 encompasses a circle,” Leeder said. “We’re trying to recruit people that will commit to $30 a month over a 12-month period. That’s $360 a year. We ask for that over a five-year period, so it’s an $1,800 commitment over five years. That allows us, for budgetary planning, to know that we have a five-year revenue stream.” He added that GSW would love for the Sumter Chamber to be involved. “It’s a great way to not only get people involved, but to get financial help,” Leeder said.

Reda Rowell of the GSW Foundation told the Americus Times-Recorder that a person doesn’t have to pay $30 a month, but they can pay the entire $1,800 all at once. Chamber member Sam Adams said that he would like to see more student involvement in the community from not just the student-athletes, but from the GSW Student Body in general. “The student-athletes can lead,” Adams said. “I would like to see more students stay here in Americus on the weekends because economically, that’s to our benefit. They have to eat. They will spend some money here just like they would anywhere else. It benefits all of us here locally.”