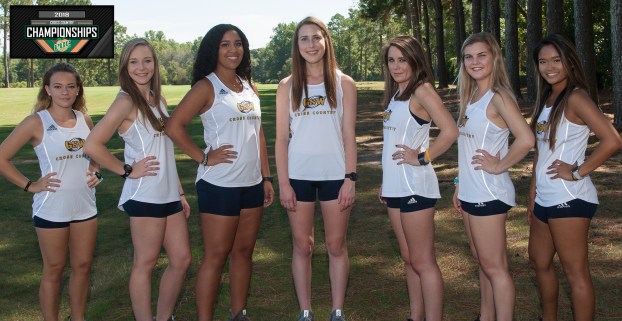 BEECH ISLAND, SC – The GSW women’s cross country team finished in eighth place out of 10 teams at the Peach Belt Conference Championships hosted by Augusta University on Saturday, November 3, at Redcliffe Plantation in Beech Island, SC. The Lady Hurricanes finished up their season on a good note as all seven members of the team ran season-best times in the finale.

The GSW Lady Hurricanes raced on this same course on Saturday, September 22. Since that time, they saw marked improvement in times across the board on Saturday, November 3. The biggest improvement came from Regan. She shaved two minutes and 25 seconds off her September 22 time. Exum (1:55) and Ross (1:46) took nearly two minutes off their pace. McGarr (0:47) was just shy of the one-minute mark. Roble (0:29) and Lewis (0:25) were significantly faster as well.

Flagler College placed four runners in the top 11 to finish with 46 points and edge the University of North Georgia (60) for the team title.

Heloise Duffie de Tassigny from Flagler was the first runner to cross the finish line in a time of 18:18.4 to win the race.