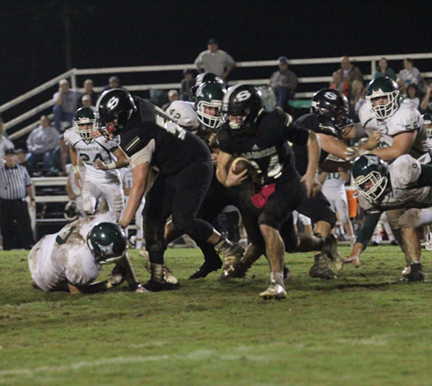 Southland running back Clay Owens scored three rushing touchdowns to help the Raiders defeat Westfield 35-7 in the first round of the GISA Class AAA State Playoffs. Photo by Sheri Bass

AMERICUS- It had been 12 years since Southland Academy hosted a playoff football game.

The Raiders (9-2) came into Harvey Simpson Stadium on Friday, November 9, for a rematch against Westfield. The Raiders defeated the Hornets in a hard-fought 15-14 win in Perry on Friday, August 31. However, this was the playoffs, and the Southland Raiders made offensive and defensive plays to power themselves to a 35-7 win over Westfield in the first round of the GISA Class AAA State Playoffs.

“We couldn’t be any prouder of our kids,” Southland Head Coach Rod Murray said. “Our game plan was to come out and get off to a great start offensively. We’ve been working hard to eliminate penalties and turnovers. A lot of people may not know how hard we work at it, but we work on it daily. Tonight, it showed. We held on to the football. We didn’t have as many penalties. We’ve got a very good football team. This was a good victory against a good Westfield football team.” Coach Murray went on to say that his team got off to a great start and he credited his assistant coaches for getting his guys ready to play. “The kids played with great passion,” Murray said. “All of the families showed up here. It was a playoff atmosphere that everyone in South Georgia should appreciate. We certainly do and we’re lucky to have it.” 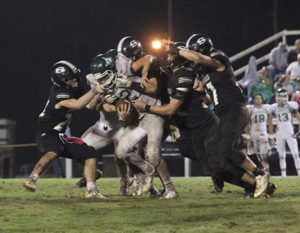 Several Southland Raiders gang up on the Westfield ball carrier to bring him down.
Photo by Sheri Bass

Southland won the toss, but elected to defer till the second half. The Raider defense stifled the Westfield offense on the Hornets’ first possession. However, the Raiders weren’t able to mount a drive either until a little over five minutes left in the first quarter. On third down from their own 42, quarterback Landon Law gave the ball to running back Clay Owens, who ran the ball 40 yards down to the Westfield 18-yard line. A couple of plays later, Owens scored the first of his three rushing touchdowns on the night. The extra point by Zane Hines was good, giving the Raiders an early 7-0 lead with 5:27 left in the first quarter.

Southland’s defense continued to stifle the Hornets’ offensive attack. Then, with a little under two minutes left in the first half, Southland had the ball on their own 30-yard line. On first and 10 from the 30, they gave the ball to Owens, who promptly broke through the Westfield defensive line and ran the ball 70 yards for his second rushing touchdown of the night. Hines’ extra point attempt was good, and the Raiders enjoyed a 14-0 halftime lead.

Southland wasn’t able to mount a drive on their first possession of the second half, and the Raiders were forced to punt. However, the Raider defense came up big as Westfield quarterback Garan Daw’s pass was intercepted by Nathan Duke, who ran it back for a touchdown. Hines’ extra point was good, and the Raiders enjoyed a 21-0 lead early in the third quarter. 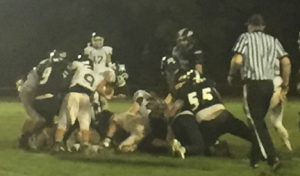 Southland’s Chandler Studdard (9) and Ragan Norman (55) trying to make a play for the Raiders.
Photo by Ken Gustafson

On the Hornets’ next possession, the Raider defense flexed its muscles once again. On third and nine from their Own 26, the Hornets tried to gain the necessary first-down yardage, but linebacker Chandler Studdard sacked Daw for a 10-yard loss. Westfield would half to punt.

However, Westfield’s defense was able to hold the Raiders on offense, forcing the Raiders to punt. The Raiders decided to fake the punt, and Owens, who served as the punter, tried to run the ball for first-down yardage. However, as Owens was running out of bounds, he was hit late by a Westfield player, resulting in a personal foul against the Hornets. Instead of having decent field position, the Hornets were backed up to their own 22-yard line. They would move the ball up to the 34, but Daw threw his second interception of the night as Parker Weldon intercepted the pass and ran the ball 34 yards the other way for a touchdown. Hines’ extra point attempt was good, and the Raiders had a commanding 28-0 lead.

On the Hornets’ next possession, they fumbled the ball, and it was recovered by Southland’s Adam Smith, giving the Raiders great field position at the Westfield 30-yard line to begin the fourth quarter. 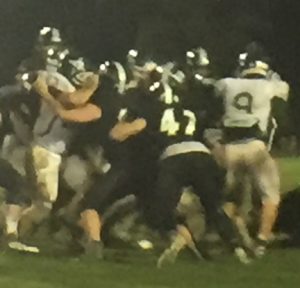 Southland’s Jake Kennon (47) trying to make a play for the Raiders.
Photo by Ken Gustafson

It didn’t take long for Owens to put more points on the board. On first and 10 from the Westfield 30, he gained eight yards. On second and two from the Hornets’ 22, Owens scored his third rushing touchdown of the night. The extra point attempt by Hines was good, and Southland had this game in complete control, leading 35-0 with 11:19 left.

With 2:04 to go, Westfield got on the board when quarterback Christian Corbett scored on a quarterback keeper. The extra point was good, making it 35-7 Southland. The Hornets tried an on-side kick, but it was recovered by the Raiders. Southland was able to run out the clock and seal the 35-7 victory. Westfield finishes their season at 4-7.

The Raiders will move on to the second round of the GISA Class AAA State Playoffs next Friday, November 16. They will travel to Newnan, GA to take on Heritage (Newnan), the No. 1 seed out of Region 1-AAA. Kickoff is set for 7:30 p.m.