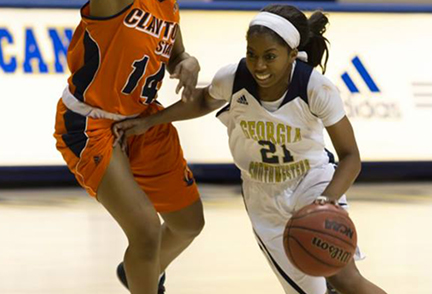 ST. AUGUSTINE, FL – The Georgia Southwestern State University women’s basketball team went 1-1 on Friday and Saturday, November 9-10, at the Southeastern Region Crossover at Flagler College. They won their season opener against Limestone College 86-68 on Friday, but lost to Lincoln Memorial University on Saturday by the score of 94-76.

In the game against Limestone, the Lady Hurricanes had four players score in double-figures. Morgan Towells led the squad with 22 points, eight rebounds, seven steals and two blocked shots. Lex Chatman and Kayla Smith both had 15 points and eight rebounds. Smith was also second on the team with four steals. Jamesha Samuel was the fourth Lady Hurricane to score in double-figures. Samuel scored 13 of the 27 bench points for GSW.

In the first quarter, Georgia Southwestern State was down by six points with 4:31 left in the quarter. Both Chatman and Towells connected with three pointers to tie the game at 10-10.

Limestone took the lead again and was up by one point, but Smith scored on a layup with 11 seconds left to give GSW a 21-20 lead at the end of the first quarter. The Lady Hurricanes never trailed again after that, and led 48-36 at the half.

In Game 2, the Lady Hurricanes faced the Lady Railsplitters of Lincoln Memorial University. GSW got off to a rough start as LMU took an 11-2 lead to start the game. The Lady Hurricanes’ first two points came off of free throws by Towells, who also nailed a three-pointer midway through the first quarter to make the score 11-5 LMU. GSW could not get back into the game as the Lady Railsplitters took control and never looked back on their way to a 94-76 win.

The Lady Hurricanes (1-1) will try for their second and third wins of the season when they travel to Albany, GA to compete in the PBC/SIAC Challenge on Friday and Saturday, November 16-17. They will play Albany State on Friday at 7 p.m., followed by a 5 p.m. game against Fort Valley State on Saturday, November 17. The games will be played at the Albany State West Campus (formerly Darton College) located on Gillionville Road in Albany.