Sophomore forward Fatou Pouye (12) is shown going in for a layup against Wallace State. She led the Lady Jets in scoring with 22 points in that match-up. Photo by SGT

The tournament took place on Saturday and Sunday, November 10-11.

The Lady Jets, ranked #11 in the nation in the NJCAA pre-season rankings, dropped a 68-66 loss to Santa Fe College in Gainesville, FL on Thursday, November 1. Since then, however, SGT has won three in a row. The last two were wins over Cape Fear Community College (82-61) and Wallace State. Both wins were in last weekend Lady Jets Tip-Off Classic.

“We won, but it was not pretty,” Lady Jets Head Coach James Frey said. “We missed too many easy layups and turned the ball over too many times. We need to be more consistent in our shooting and take care of the ball better.”

Despite seeing room for improvement, Coach Frey praised his squad for not quitting. “We were down 17-0 in the Wallace State game, but we fought back to pull within one point by the half,” Frey said. “I was very proud of the way the team kept fighting and did not give up.”

In their first game of the tournament, South Georgia Tech dominated Cape Fear Community College by the score of 82-61. The Lady Jets started out slowly, but managed to pull ahead 19-15 by the end of the first quarter. SGT increased its lead to 38-27 by halftime. In the third quarter, the Lady Jets outscored the Sea Devils 27-17 en route to the 82-61 victory. 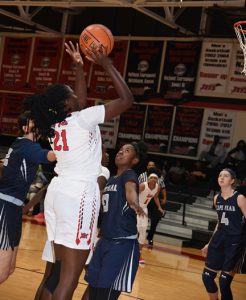 Sophomore center Bigue Sarr led South Georgia Tech in scoring with 15 points. Sarr also had seven rebounds on the night. Freshman center Laky Samo came off the bench to earn a double-double, scoring 12 points and pulling down 10 rebounds. Sophomore guard Alyssa Nieves was also in double-figures as she scored 10 points.

On Sunday, November 11, the Lady Jets had a much tougher test against Wallace State. The Lady Lions jumped out to a 17-0 lead over SGT. It took nearly four minutes for the Lady Jets to put points on the board. However, once they did, the Lady Jets began to swing the momentum in their favor. South Georgia Tech came back in the final four minutes of the first quarter to cut the deficit to 20-11. At that point, SGT went on a 21-13 run to pull to within one point at 33-32 by halftime.

Wallace State outscored the Lady Jets 12-8 in the third quarter to take a 45-40 lead by the end of the quarter. However, South Georgia Tech rallied to outscore Wallace State 22-12 in the fourth quarter to get the hard-earned 62-57 victory.

Sophomore forward Fatou Pouye scored 22 points to lead the Lady Jets. She scored 14 of those 22 points in the second half. Pouye also had nine rebounds on the day. Bigue Sarr had a double-double, scoring 18 points and pulling down 10 rebounds. Sophomore Ricka Jackson scored 10 points and pulled down eight rebounds in the win.

“We have to do a better job on layups and shooting the three-pointer,” Coach Frey said. “We were only 2 of 17 from the three-point line. That is less than 12 percent and we were only hitting 36 percent of our total field goals. We know we have some work ahead of us.”