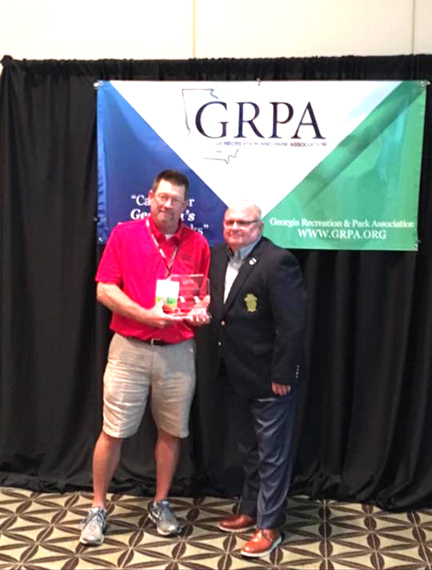 Jeff Fussell (left), Recreation Manager for the Sumter County Parks and Recreation Department (SCPRD), is receiving his reward as the Athletics Aquatics Distinguished Professional of the Year by the Georgia Recreation and Parks Association. GRPA President Randy Spivey is standing to Fussell’s right. Submitted Photo

“I had no idea I was going to be receiving this award until I accepted it,” Fussell told the Americus Times-Recorder. “I don’t do this for self-gratification, but when your peers recognize the things that you have done and the hard work that you put in to accomplishing things, it’s very humbling.”

As the recreation manager for the SCPRD, Fussell heads up youth softball, soccer and is in charge of the pools run by the SCPRD, as well as the splash pad. SCPRD Director Tim Estes mentioned to the Sumter County Board of Commissioners (BOC) at their monthly work session Tuesday night, November 13, that Fussell had received the award.

“I’m proud to see Jeff Fussell being honored with this award,” Estes told the Americus Times-Recorder. “His efforts, on the district and state level, in GRPA are evident to his peers around the state. This is well deserved.” 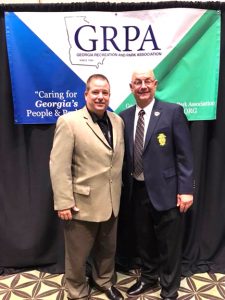 Estes also told the BOC that he has been named the State Athletic Chairman for the Georgia Recreation and Parks Association (GRPA). Estes told the Americus Times-Recorder that he is humbled to have been appointed as the State Athletic Chairman by GRPA President Randy Spivey. “I have served on this committee for several years, and now, to be able to lead such a distinguished group of athletic professionals is one of the high points in my career,” Estes said.

In other news involving the SCPRD, youth basketball registration will be going on through Friday, November 30. “We expect to have about 200 kids signed up this year,” Estes said.