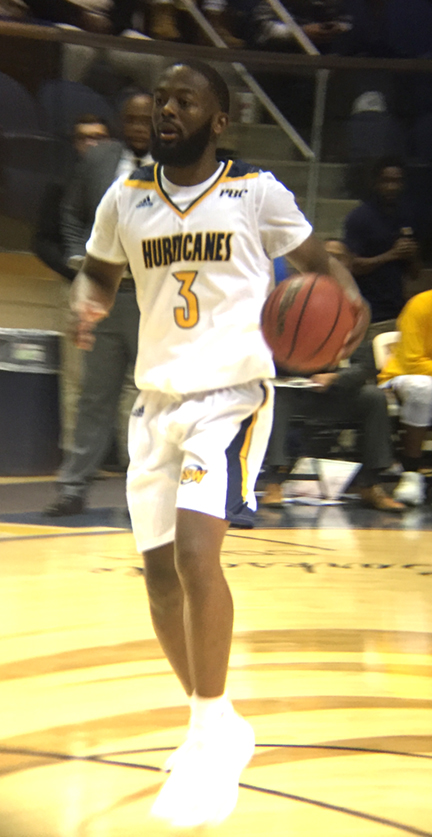 AMERICUS – The Georgia Southwestern State University men’s basketball team (1-2) jumped out to a 10-4 lead early and dominated for most of the game on their way to a 68-59 victory over Fort Valley State University Wednesday night, November 14, at the GSW Storm Dome.

It was the Hurricanes’ first win of the 2018-19 season, and it came at their first home game of the season.

Senior graduate transfer Jalen Morgan had a double-double, leading the Hurricanes with 21 points and 11 rebounds. Senior guard Quenten Taylor was also in double-figures, scoring 14 points. Senior guard Devin Watson chipped in 12 points in the winning cause.

“Overall, I thought our guys came out and played hard,” GSW Head Coach Ben Hicks said. “We went to North Carolina and lost two tough games. Our guys had a great week of practice. We watched film and they identified what they had to correct. Give credit to Fort Valley. They played a two-three zone during the first half, which we saw it on film and we knew they were going to play man-to-man defense. They kind of snuck us with the 1-2-2 zone. We had a hard time scoring against it. Overall, the guys battled through adversity and we got the win.” 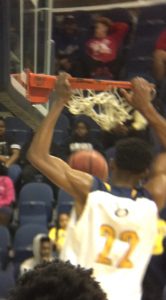 GSW senior forward Jalen Morgan finishing a two-handed slam. Morgan had a double-double, scoring 21 points and pulling down 11 rebounds to lead the Hurricanes to a 68-59 win over Fort Valley State.
Photo by Ken Gustafson

The Hurricanes jumped out to a 10-4 lead before FVS Head Coach Mark Sherrill called a timeout with 16:19 to go in the first half.

However, that didn’t stop the Hurricanes as they outscored the Wildcats 15-9 over the next six minutes, capped off by a layup from Eric Hall Jr. to make it 25-13 GSW. Grant Howard then nailed a three-pointer to put the Hurricanes up by 15. GSW continued to dominate in the first half as they pushed the lead up to as much as 17 points. 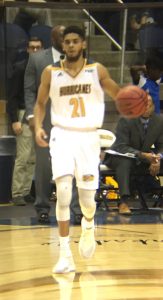 Senior guard Devin Watson with the basketball. Watson scored 12 points and dished out three assists in the Hurricanes 68-59 win.
Photo by Ken Gustafson

With 1:33 to go in the first half, Morgan scored on a breakaway dunk to make the score 40-25 Hurricanes. GSW continued to feed Morgan on the inside, and he delivered. Former ASHS standout and GSW freshman guard Eric Hall Jr. nailed a three-pointer to close out the first half with GSW up 46-29.

Morgan scored 17 of his game-high 21 points in the first half. Quenten Taylor scored 10 first-half points, including two shots from beyond the arc. 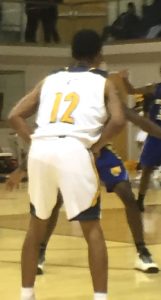 Freshman guard and former ASHS standout Eric Hall Jr. with the ball. He scored five points in his home debut as a GSW Hurricane.
Photo by Ken Gustafson

Neither team could score a basket for the first minute and a half of the second half until GSW senior guard Kwei Lartey hit a three-pointer to put GSW up 49-29. A few minutes later, with the score 50-32 in favor of the Hurricanes, Devin Watson was able to score on the inside to put GSW back up by 20, prompting a timeout from FVS with 15:34 to go in the game. 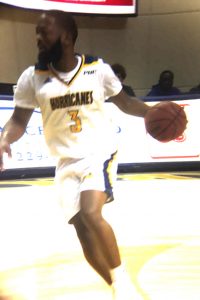 Quenten Taylor drives towards the basket.
Photo by Ken Gustafson

Over the next two minutes, GSW struggled to score, and K’Viontae Williams created a steal and scored on a breakaway dunk. This prompted Hicks to call a timeout to settle his squad down. At the 12:00 mark, GSW senior forward Grant Howard knocked down a three-pointer to put the Hurricanes back up by 20 at 57-37.

The Wildcats went on an 8-0 run, capped off by a basket by D’Angelo Strickland. This cut the Hurricanes’ lead to 57-45. Strickland then hit a baseline jumper to cut the lead to 10. The Hurricanes were struggling to score on the offensive end, and the Wildcats continued to cut into the lead as Jaylon McMillan scored to cut GSW’s lead to single-digits at 57-49. 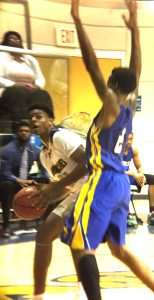 GSW freshman forward Jamari Dean tries to go up for a shot against an FVS defender.
Photo by Ken Gustafson

The Hurricanes finally broke their scoring drought when Watson hit a three-pointer to put the Hurricanes up 60-49.

With 5:28 to go and GSW up 62-51, play was stopped because Morgan lost one of his contact lenses. Fortunately, he was able to find it, which brought a loud cheer from the crowd.

Fortunately for the Hurricanes, they made a run to push their lead back up to 15 at 66-51 on a layup by Taylor. 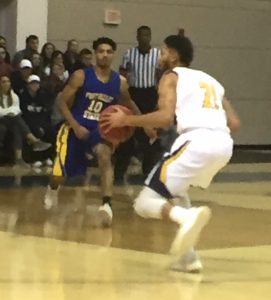 Devin Watson drives to the basket.
Photo by Ken Gustafson

However, the Wildcats wouldn’t go quietly as Strickland hit another three-pointer to cut the Hurricanes’ lead to 66-57 with a little over two minutes to go. However, GSW held on to win 68-59.

FVS was led in scoring by K’Viontae Williams with 21 points. Shawn Foxbrennen was also in double-figures with 12 points. The Wildcats shot 23-60 (38.3 percent) from the field for the game. They were 5-15 from the three-point line (33.3 percent). One big difference in the game that helped the Hurricanes was the lack of free throws made by the Wildcats. FVS made 8-16 shots from the foul line, shooting 50 percent for the game. The Wildcats fall to 0-4 on the season. 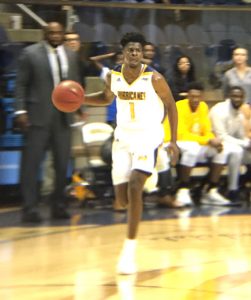 The Hurricanes will try to continue their winning ways when they travel down to Albany to take on the Golden Rams of Albany State on Saturday, November 17, at 3 p.m. Their first Peach Belt Conference game will take place on Saturday, December 1, in Aiken, SC against the University of South Carolina Aiken. Tip-off for that game is at 3:30 p.m. On Monday, December 3, the Hurricanes travel to Fort Valley, GA for a rematch against FVS. Tip-off is scheduled for 7:30 p.m. GSW’s next home game is Thursday, December 13, against Albany State. Tip-off for that game is scheduled for 7:30 p.m.