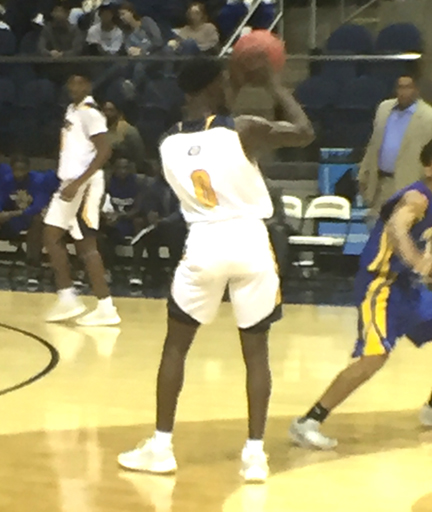 GSW senior guard Kwei Lartey seen here about to make a pass against Fort Valley State. Lartey led the Hurricanes with 16 points in the loss to Albany State. Photo by Ken Gustafson

ALBANY – The Georgia Southwestern State University men’s basketball team traveled down the road to Albany, GA to take on the Golden Rams of Albany State on Saturday, November 17.

The Hurricanes were hoping to keep their winning streak going, but a 14-2 run by the Golden Rams over the final five minutes of the first half was a catalyst in helping ASU earn a 68-65 win over GSW at the Albany State West Campus.

Things looked good for the Hurricanes early in the game. They jumped out to a 10-point lead with 12:03 left in the first half. However, that 14-2 run by ASU resulted in the Hurricanes trailing 32-29 at halftime.

It was an evenly-played second half, but ASU shot 53 percent from the field and led by as many as 13 points. The Hurricanes stormed back to give themselves a chance to win. They went on an 8-1 run with 42 seconds left. However, Devon Higgs’s three-point attempt at the buzzer to tie the game fell short.

The Hurricanes had three players to score in double-figures. Kwei Lartey led GSW with 16 points. Jalen Morgan scored 15 and Jamari Dean scored 12. Jared Harrington led ASU in scoring with 13 points. The Golden Rams shot 53 percent from the field in the second half, which was a factor in ASU getting the victory. For the game, GSW shot 38.9 percent (21-54) and ASU shot 43.5 percent (20-46). The Hurricanes out rebounded the Golden Rams 35-32. All of the other stat categories between the two teams were almost identical except for two of them. ASU scored 20 points off turnovers to the Hurricanes’ nine. The bench for ASU outscored the Hurricanes’ bench 23-12.

After the Thanksgiving break, the Hurricanes will try to rebound with a win when they travel to Aiken, SC on Saturday, December 1, for their first Peach Belt Conference game against the Pacers of the University of South Carolina Aiken. Tip-off is scheduled for 3:30 p.m.