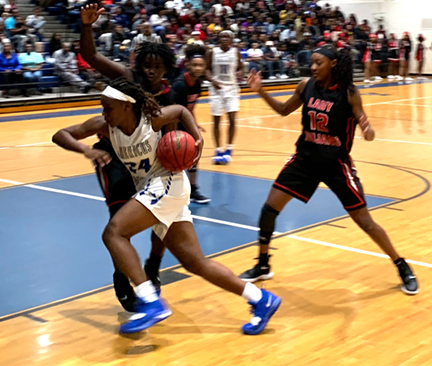 AMERICUS – It was a tough, hard-fought rivalry game to begin the season. However, the Lady Panthers of ASHS (1-0) got the 2018-19 season off to a good start with a 58-52 win over the Lady Trojans of Lee County on Saturday, November 24, at Americus-Sumter High School.

The Lady Panthers played an aggressive first half, but got into foul trouble due to some over aggressiveness. “In the first half, we got into some foul trouble due to some crazy fouls,” ASHS Head Coach Sherry Harris said. “There were fouls away from the basket. We committed fouls going over the back after a missed shot. It was crazy play early on because of the excitement of it being a rivalry game. However, in the second half, we calmed down. In the third quarter, I thought we played really good defense in our two-three zone. They (Lee County) missed a lot of shots. Late in the game, we made some crucial free throws when we had to.”

The first half was a back-and-forth affair between both teams, with Lee County owning a 26-24 halftime lead. In the second half, the Lady Panthers were able to take the lead and build on it. 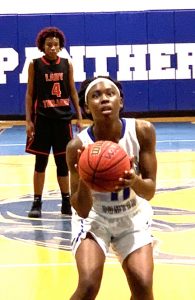 However, the Lady Panthers made some crucial defensive stops down the stretch. One big play was a foul committed by the Lady Trojans, coupled with a technical foul. Deasia Ford and Brianna Pope both knocked down free throws to seal the win for ASHS.

The Lady Panthers had four players in double-figures. Destinee Sims led all scorers with 16 points. Pope had 14. Ford had 11 and Trinity Jackson scored 10 points in the winning cause. 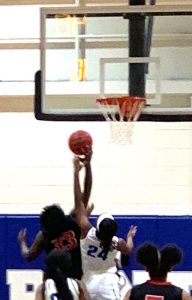 Brianna Pope (24) fights for a rebound against Lee County.
Photo by Ken Gustafson

Next up for the Lady Panthers is a Region 1-AAAA home game against Dougherty on Tuesday, November 27. Tip-off begins at 6 p.m.