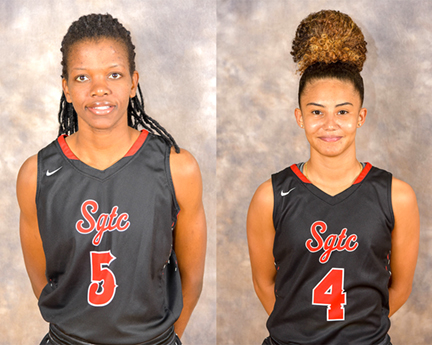 Amara Edeh, 5, and Alyssa Nieves, 4, were the top scorers for the Lady Jets in their wins over Roane State and Pensacola State in the Georgia Highlands Thanksgiving Classic Tournament. Photo by SGT

“I was not sure we could defeat Pensacola State without Bigue and Fatou,” SGT Head Coach James Frey said. “The other players really stepped up and that is what they are going to have to do for us to keep beating good teams.” Frey added that he hopes both Sarr and Pouye will be back in the lineup for this coming weekend or next week. “I was very proud of the way the team came together,” Frey said.

Against 25th-ranked Pensacola State, the Lady Jets had four of their five starters score in double-figures to lead SGT to a 73-61 victory. Sophomore guard Alyssa Nieves led the team in scoring with 18 points. Nieves hit four of 13 attempts from the three-point line and also led the team in rebounds with nine. She also had two assists and three steals on the night. Jackson was close behind, scoring 17 points and grabbing six rebounds. She also tallied two assists and four steals.

The Lady Jets will host Southern Crescent Technical College in a Georgia Collegiate Athletic Association (GCAA) Division I conference game on Saturday, December 1, at the Hanger. Tip-off for that game is scheduled for 1 p.m. The Lady Jets are currently ranked #1 in the conference with a 3-0 record and have an overall record of 8-1 on the 2018-19 campaign. The Lady Jets will then travel to Cuthbert, GA on Saturday, December 8, to take on Andrew College in a GCAA conference game. Tip-off is scheduled for 1 p.m.

As far as the Jets (1-5) are concerned, they will travel to Walterboro, SC to take on the University of South Carolina-Salkahatchie on Saturday, December 1, at 4 p.m. The Jets will return home to face Marion Military College on Tuesday, December 4. Tip-off for that game is scheduled for 7 p.m.