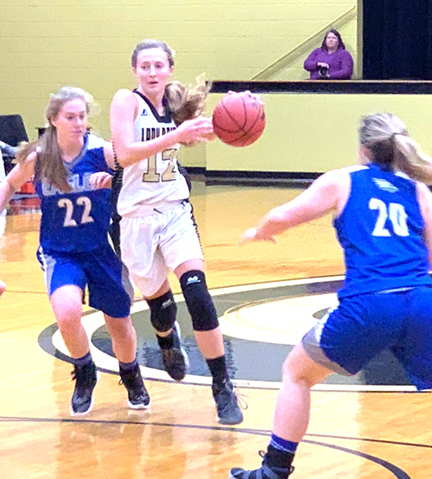 AMERICUS – The Lady Raiders of Southland Academy (3-0) had their home opener on Tuesday, November 27, against Terrell Academy. They did not disappoint as they were able to defeat the Lady Eagles 40-36 in a hard-fought battle.

“Defense and free-throw shooting is what won that game for us down the stretch,” Southland Head Coach Ty Kinslow said. “Offensively, we are still a work in progress. We keep getting better.  As long as we keep playing good defense, rebound and take care of the basketball, we will be in every game.” Kinslow went on to mention that he was proud of the girls who stepped up and made free throws after starting point guard Sydney Payne fouled out of the game..

The Lady Raiders had two players to score in double-figures. Calyn Fort led Southland with 11 points and Payne had 10 points. Payne was money from the foul line. She scored eight of her 10 points on free-throw shooting. Macy Williams and Maddie Crisp each scored six points for Southland.

Terrell Academy was led in scoring by Kate Douglas with 12 points. 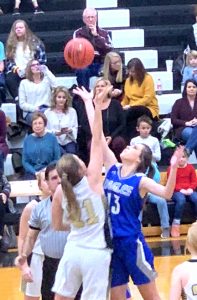 Southland opened up a 4-0 lead on free throws from Crisp and a jump shot from Williams. Calyn fort also scored four points early in the first quarter to give the Lady Raiders an 8-5 lead. Near the end of the first quarter, Southland had extended its lead to 12-7, but Terrell Academy scored three unanswered points to end the first quarter with southland up 12-10.

Payne and Williams each scored to increase the Lady Raiders’ lead to 16-10 early in the second quarter. However, the Lady Eagles came back with two baskets of their own to cut Southland’s lead to 16-14 with about 1:30 left in the half. Both teams would trade baskets, but Southland went into halftime with an 18-15 lead.

For the first few minutes of the third quarter, neither team could buy a basket. However, Southland scored the first four points of the quarter to take a 22-15 lead. With 3:18 left in the quarter, Payne was fouled in the act of shooting and made both free throws, giving Southland a 24-15 lead.

Southland went into a full-court press, which forced the Lady Eagles into committing turnovers. This prompted Terrell Academy Head Coach Keith Jones to call a timeout. TA’s Sierra Brogdan broke the Lady Eagles’ scoring drought with a basket with around a minute left in the third quarter. The Lady Raiders continued their high-pressure defense, which disrupted TA’s offense. 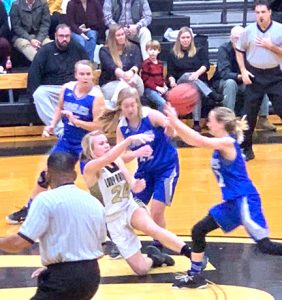 The Lady Eagles outscored Southland 4-1 early in the fourth quarter to cut the Lady Raiders’ lead to 29-23. This was capped off by a basket by TA’s Laiken Daniel. Southland had been struggling to score during this time until Holly McCain was fouled while shooting and made both free throws. The Lady Eagles cut Southland’s lead to five when Daniel nailed a three-pointer to cut the Lady Raiders’ lead to 31-26. With 3:30 left in the game, Kate Douglas nailed a three-pointer for Terrell Academy to cut Southland’s lead to 33-29. However, with a little over three minutes left in the contest, Payne was fouled and hit both free throws, pushing the lead back up to six at 35-29. Kinslow called a timeout with under two minutes left to settle his club down. However, out of the timeout, Jennifer Todd hit a three pointer to pull the Lady Eagles to within three at 35-32. Then with under a minute to go, Terrell Academy got closer as Sara Lane Lynch scored on the inside to cut Southland’s lead to 36-34.

However, with 54 seconds to go, Fort was fouled and made both free throws, pushing the Lady Raiders’ lead back up to four at 38-34. Brogdan was fouled while shooting and made the first free throw before Kinslow called timeout with about 30 seconds left. Brogdan missed the second of her two free throws, but TA only trailed 38-35. They had one last chance to tie the game, but the Lady Raiders forced a turnover and went on to win 40-36. 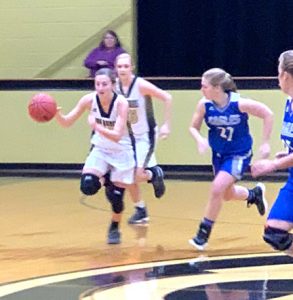 One big factor in this game was the inability of the Lady Eagles to make shots. That was mostly due to the defense of Southland. Terrell Academy also struggled at the free-throw line. However, not so for the Lady Raiders. In addition to Payne’s eight free throws, Calyn Fort went 7-for-10 from the charity stripe and Holly McCain went 5-of-6. Near the end of the game, however, it was Reese Roland who was able to seal the deal by making two free throws. They were her only points of the game, but they were key in the Lady Raiders’ four-point win. As a team, Southland made 26 of 30 free-throws (84 percent), while the Lady Eagles made 5 of 14 free throws as a team (64 percent).