ELLAVILLE – The Schley County Lady Wildcat basketball team (2-0) grabbed control of the game early by forcing turnovers and converting them into points as they routed the Lady Panthers of Pataula Charter Academy 84 -11 Friday evening, November 30, at Schley County High School. 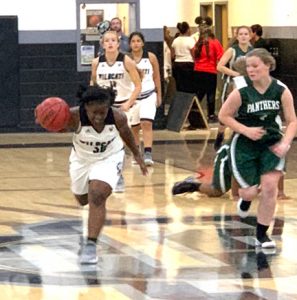 The Lady Wildcats applied high-pressure defense against PCA and forced turnovers on almost every offensive possession the Lady Panthers had. The Lady Wildcats scored numerous fast-break layups in the first half. By halftime, SC had a 51-5 lead.

PCA scored one basket in the first quarter. That basket was by Cielo Murillo. The only other basket for the Lady Panthers in the first half was by Peyton Peek, who knocked down a three-pointer. 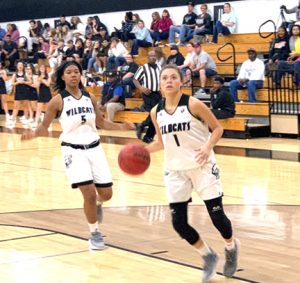 Schley County guard Carmen Phillips about to score on a layup. Phillips led the Lady Wildcats with 20 points.
Photo by Ken Gustafson

Being that the point spread was so large, the officials shortened the third and fourth quarters to six minutes a quarter, but that didn’t stop the Lady Wildcats’ onslaught. They continued to create turnovers against PCA and turn them into points. With 4:45 left in the game, the Lady Wildcats led 80-9. They went on to win 84-11.

PCA was led in scoring by Peyton Peek with five points.

Darden Campbell goes up for a layup and is fouled hard.
Photo by Ken Gustafson

Up next for the Lady Wildcats is another home game. This one will be their first Region 4-1A contest against Crawford County on Saturday, December 1, at 12 p.m.