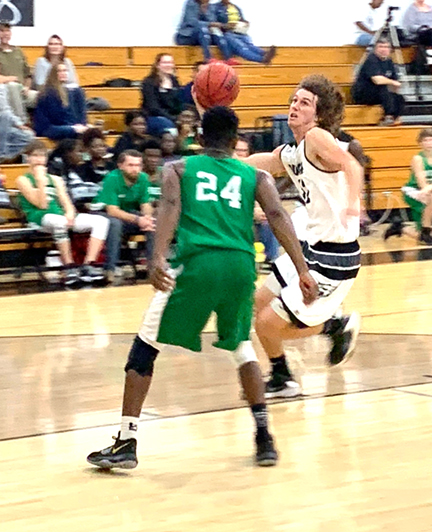 Schley County’s Ashton Goodin goes up for a shot against Markies Johnson of Pataula Charter. Photo by Ken Gustafson

ELLAVILLE – The Schley County boys’ basketball team (1-1) jumped out to a 7-0 lead early and never looked back as they used their defensive pressure to create turnovers and turn them into points. The Wildcats went on to thrash the Panthers of Pataula Charter Academy 67-8 Friday night, November 30, at Schley County High School.

Having just finished the football season, many players on the football team are also members of the Wildcat basketball team. They were just starting to make the transition from football to basketball. This happens at a lot of high schools this time of year.

“First of all, we’ve got to get the football players in shape,” Schley County Head Coach Ernest Scott said. “For some of the guys, this was their second ball game. They have to get use to the system again. We still have some kids out.” Scott went on to say that he will have his center, Zykevious Walker, in the lineup on Saturday afternoon, December 1, when the Wildcats host Crawford County. He also said that Zamon Ross, who is a stellar running back on the football team, is still out with a fractured wrist. Scott also said that the game against Pataula Charter was a tune-up game and that Crawford County will be a much tougher test for his team. 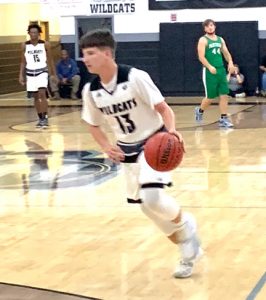 Schley County guard Tripp Lumpkin with the basketball. Lumpkin scored nine points in the win over the Panthers.
Photo by Ken Gustafson

Markies Johnson led the Panthers with three points. All of his points came in the first quarter. 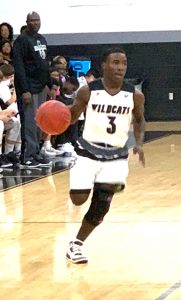 The Wildcats began forcing turnovers early and often. Those turnovers led to numerous fast-break baskets for SC. With 1:18 left in the first quarter, the Wildcats enjoyed an 18-2 lead. They finished the quarter leading 20-3. 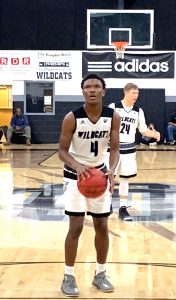 Schley County’s Tra Sampson, a running back on the football team, at the free-throw line.
Photo by Ken Gustafson

The second quarter was much like the first as PCA struggled to score, while SC continued to force turnovers and score at will. The Wildcats outscored the Panthers 28-2 in the second quarter to take a 48-5 lead into halftime.

The Wildcats continued their onslaught in the second half as they outscored the Panthers 13-0 to begin the half. SC continued to dominate throughout the second half. With just under 30 seconds left in the game, Lumpkin hit a three-pointer to give the Wildcats a 67-7 lead. PCA’s Caleb Murphy hit a free throw in the closing seconds to make the final score 67-8. 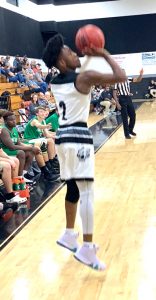 The Wildcats will host Crawford County in their first Region 4-1A game on Saturday, December 1, at 1:30 p.m.