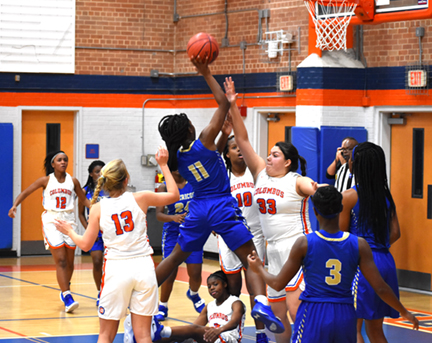 Two other players were in double-figures for the Lady Panthers. DeAsia Ford scored 13 points, dished out six assists and had four steals. Divine White was also in double-figures. White scored 12 points in the winning cause.

For the Lady Blue Devils, they were led in scoring by Enyshuan Jones with 23 points. Faith Knoedler was also in double-figures for Columbus. She scored 14 points in the losing cause.

With the loss, Columbus drops to 1-5 overall on the season and 0-2 in Region 1-AAAA play.

ASHS had a strong first quarter and outscored Columbus 16-9 by the end of the quarter. However, the Lady Blue Devils had a 13-10 advantage in the second quarter, cutting the Lady Panthers’ lead to 26-22 at the half.

However, Jones scored 10 of her 23 points in the third quarter to lead the Lady Blue Devils to 15 third-quarter points. By the end of the quarter, ASHS only had a 38-37 lead.

Divine White scored six of her 14 points in the final quarter to help push the Lady Panthers to the 51-47 victory.

Up next for the Lady Panthers is a non-region home game against Crisp County (0-5) on Friday, December 7. Tip-off is scheduled for 6 p.m. They will then turn around on Saturday, December 8, and travel to Albany to take on Region 1-AAAA opponent Dougherty at 6 p.m.