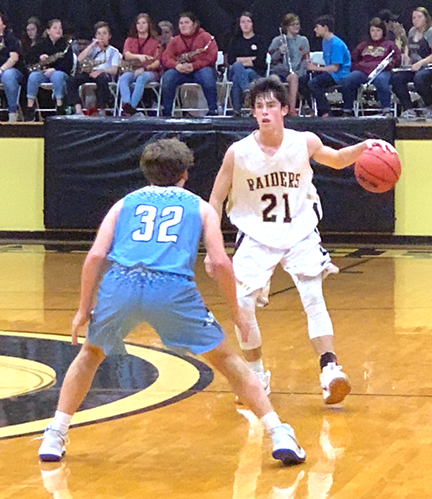 Southland guard Nathan Duke with the basketball. Duke scored two points in the win over SGA. Photo by Ken Gustafson

AMERICUS – The Southland Academy Raiders (3-0) found themselves down 21-11 in the second quarter, but they made a crucial 10-0 run to get back in the game. They would go on to defeat the Warriors of Southwest Georgia Academy 47-42 Tuesday evening, December 4, at Southland Academy.

“We put more pressure on the ball in the back court and we got a few steals that way. We double teamed their best player, number 10 (Austin Pickle),” Southland Head Coach Rundy Foster said. “We got them to throw it to somebody else. At that point, it wasn’t as good a situation for them. Number 10 (Pickle) is a good player. He does a good job for them, but when we got it out of his hands, I thought we had a pretty good chance of getting the basketball.” 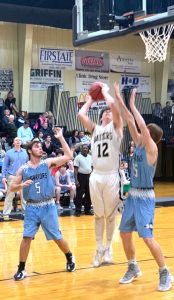 Southland forward Chandler Studdard goes up for a basket. Studdard scored 10 points in the win over SGA.
Photo by Ken Gustafson

Foster went on to say that Chandler Studdard, Luke Law, Landon Law and Hunter McCain were instrumental in getting the Raiders back in the game. Though he was happy with the win, Foster was disappointed with the team’s performance at the foul line. “Tonight was our worst free-throw shooting night. We were 3 for 11,” Foster said. “We missed a couple of front-ends of one-and-ones in the fourth quarter. When you get fouled, you need to put them away. That’s the time to make your free throws, and we didn’t do a good job of that down the stretch. We took a couple of ill-advised shots down the stretch, but that’s part of growing pains. We’re getting better.” 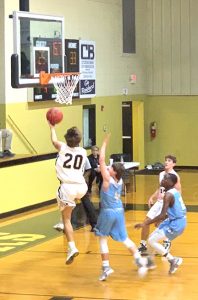 Southland guard Owen Exley goes up for a layup. Exley hit one free throw in the win over SGA.
Photo by Ken Gustafson

The Warriors jumped out early to a 10-2 lead in the first quarter before Max Foster nailed a three-pointer to put Southland to within five. A few minutes later, SGA had a 14-7 lead until the Raiders exerted full-court pressure. James Griffin was able to score two straight baskets to put the Raiders within three at 14-11.

However, the Warriors went on a 7-0 run, capped off by a jumper by Pickle to put them up 21-11. However, the Raiders wouldn’t quit. The Raiders went on a 10-0 run to tie the game at 21-21. They did this by forcing turnovers due to their high-pressure defense. Southland outscored SGA 4-2 in the final minute thanks to baskets by Hunter McCain and Luke Law to give the Raiders a 25-23 halftime lead.

Chandler Studdard and Luke Law each led the Raiders in the first half with five points. Pickle led the Warriors with five first-half points, including a three-pointer in the second quarter. 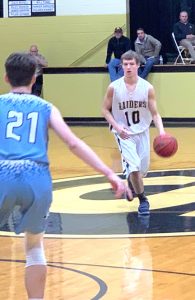 The Warriors struggled to score in the third quarter. Their shooting went cold and the Southland defense disrupted their offensive productivity. SGA only scored one point in the third quarter. It came off a free throw by Jaxson Haire with about a second left in the quarter. As for the Raiders, they increased their lead on a three-pointer by Hunter McCain to make the score 36-26 Raiders by the end of the third quarter.

The Warriors outscored the Raiders 7-3 in the first few minutes of the fourth quarter thanks to five points scored by Pickle. McCain scored for Southland to give them a 41-33 lead. However, Pickle drove through the Raider defense and scored to cut the Raiders’ lead to 41-35. Luke Law responded by hitting another three-pointer to give the Raiders a 44-35 cushion with 2:44 to go in the game. Tylek Marshall scored for SGA, but Southland had an answer. Max Foster drilled another three-pointer to put the Raiders up by 10 at 47-37 with under two minutes left.

However, Pickle drew a foul by using a pump fake from outside the three-point line and went up to shoot. This resulted in Pickle getting three free throws. He made 2 of 3, cutting Southland’s lead to 47-41.

Up next for Southland is a home game on Saturday, December 8, against Lee-Scott Academy from Auburn, AL. Tip-off is scheduled for 6:30 p.m.