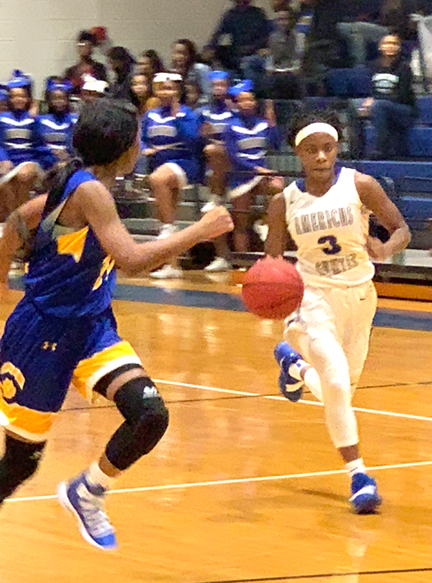 ASHS guard Tiffani Goodman led the Lady Panthers with 20 points in the 77-17 rout of Crisp County. Photo by Ken Gustafson

AMERICUS – The Americus-Sumter Lady Panthers (4-1, 2-0) used their full-court pressure defense to jump out to an early 16-4 lead. They took over the game from there on their way to a 77-17 thrashing of Crisp County Friday evening, December 7, at Americus-Sumter High School.

In a lopsided game like this, sometimes the players on the winning team can get complacent. This was not the case for the Lady Panthers. “We just told them to stay aggressive and get after the ball,” ASHS head coach Sherry Harris said. “The ball bounced our way and fell into our hands, but we missed a whole bunch of easy baskets too.”

Sims got the opening basket for the Lady Panthers. For the next minute or so, ASHS led 4-2 before Brianna Pope scored to give ASHS a 6-2 lead. However, at that point, the Lady Panthers forced the Lady Cougars into committing turnover after turnover, resulting in numerous fast-break layups for ASHS. The Lady Panthers had gone on a 10-4 run, resulting in a 16-4 lead. From then on, the Lady Panthers continued their full-court pressure defense, which resulted in another 12-2 run. By the end of the first quarter, ASHS had a 28-6 lead.

Much of the same continued in the second quarter, with ASHS extending their lead to 40-7 with close to four minutes left in the first half. With about a minute left, Pope scored on the inside to give the Lady Panthers a 52-8 lead.

Throughout the first half, the Lady Panthers’ defense was so stifling and intense that the Lady Cougars could barely get a shot off, let alone score points. By halftime, ASHS led 54-8. 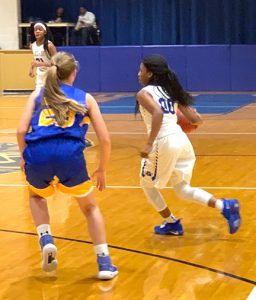 Up next for ASHS is a Region 1-AAAA rematch at Dougherty (2-6, 1-3) in Albany on Saturday, December 8. In the first meeting between these two teams, ASHS won convincingly by the score of 70-21 on Tuesday, November 27, in Americus. Tip-off is scheduled for 6 p.m.

From Staff Reports   ELLAVILLE – The Schley County Lady Wildcat basketball program has had some talented players and teams... read more