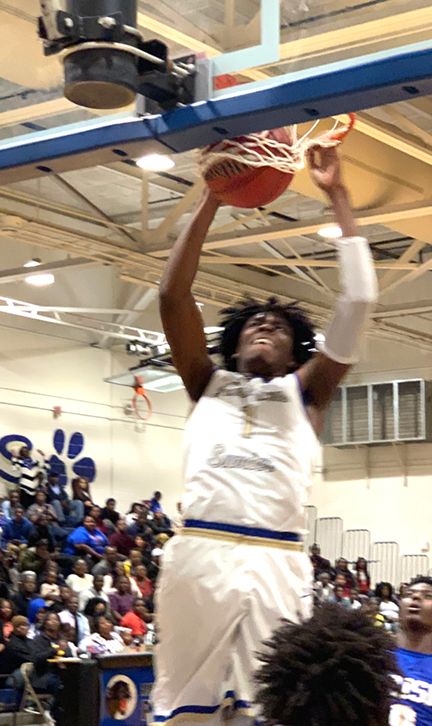 AMERICUS – The undefeated Americus-Sumter Panthers (6-0, 2-0) jumped out to a 16-9 lead in the first quarter and took control from there on their way to a dominating 84-56 rout of the Cougars of Crisp County.

While this is a traditional rivalry, this year’s meeting between the two schools went clearly in favor of ASHS.

“It was exciting. It’s always good. It’s a rivalry game,” ASHS head coach Michael Hoffpauir said. “There’s not a whole lot you have to tell the guys to get them excited to play. They came out with a lot of energy tonight. We’ve been working on our transition offense. We’ve got good guys who are students of the game, and we want to be able to display that every night. Tonight was one of those nights that we just got out and ran. We knocked down open shots and we had a lot of dunks. I’m very, very proud of what we did.”

The Panthers had three players in double-figures. Trae Brown led the Panthers in scoring with 19 points. Nine of those points came on three-pointers. Joshua Lusane scored 16 points and Joshua Moore had 10. Both Jakobe McCuller and Quevoluia Willoughby each chipped in eight points in the winning cause. 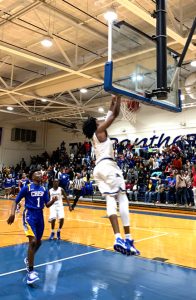 Joshua Lusane scores two more points on his second dunk of the night against Crisp County.
Photo by Ken Gustafson

The Panthers jumped out to a 10-2 lead. However, the Cougars scored four unanswered points to try to keep it close. However, the Panthers went on a 16-9 run to take a 26-15 lead by the end of the first quarter. During the first quarter, Lusane had two electrifying slam dunks. There was a slam dunk by Joshua Moore as well. The Panthers also shot the ball well from beyond the arc. Brown and Jakobe McCuller each hit three-pointers. It was an exciting brand of basketball displayed by the Panthers.

ASHS scored eight unanswered points to begin the second quarter. By the 2:24 mark of the quarter, the Panthers led 47-20 until Jayren Fox hit two free throws for the Cougars.

The Panthers forced the Cougars into committing turnovers and turned them into points.  However, the Cougars’ Willie Poole hit a three-pointer at the halftime buzzer, sending a message that Crisp County wasn’t going away. Nevertheless, the Panthers owned a 52-28 lead at the half. 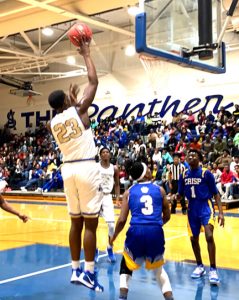 ASHS forward Joshua Moore goes up to try to score. Moore scored 10 points in the win over Crisp County.
Photo by Ken Gustafson

ASHS went on a 12-0 run to start the second half, capped off by a three-pointer by Brown. The Panthers continued their hot shooting as Lusane hit a three-pointer to give ASHS a 67-31 lead. The Cougars responded with an 8-0 run of their own, capped off by a basket by Williams to make the score 67-39 ASHS at the 2:55 mark of the third quarter. This prompted Hoffpauir to call a timeout. However, out of the timeout, Williams hit another jumper for the Cougars to cut the Panthers’ lead to 67-41. Lusane was fouled while shooting and made 1 of 2 free throws. Lusane scored another basket on a dunk to give ASHS a 70-41 lead as the third quarter was winding down. Then with 41.5 seconds left in the third, Quevoluia Willoughby scored and was fouled. However, he missed the free throw, and the Panthers ended the third quarter with a 72-41 lead. 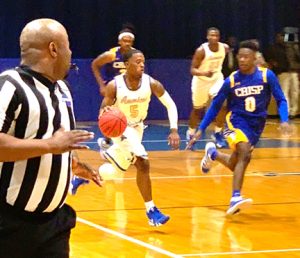 The Cougars scored four unanswered points, including a basket by Damion Cross. However, Willoughby responded with a basket of his own. With 3:01 left in the game, the Cougars had outscored ASHS 8-4, but never mounted a serious threat to get back in the game. 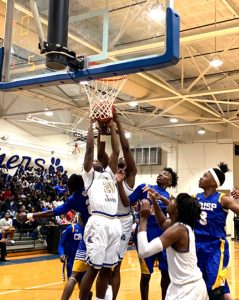 By this time, the Panthers had total control of the contest. ASHS put an exclamation point on the game when Sam Crumbley scored on a one-handed dunk with less than a minute to go. 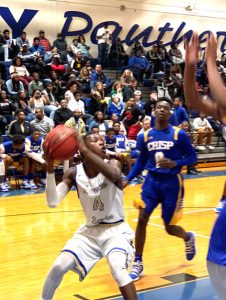 ASHS guard Trae Brown trying to score on the inside. Brown led the Panthers with 19 points against Crisp County.
Photo by Ken Gustafson

Up next for ASHS is a trip down to Albany on Saturday, December 8, to take on Region 1-AAAA opponent Dougherty (4-4, 2-2) in a rematch. The two teams met early this season on Tuesday, November 27, at ASHS. The Panthers won that game easily by the score of 87-58. Tip-off for Saturday night’s game is scheduled for 7:30 p.m.