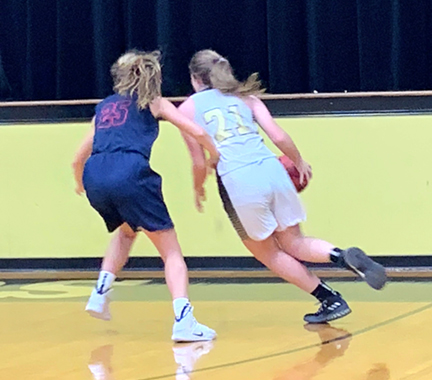 AMERICUS – Southland Academy forward Macy Williams scored 13 of her game-high 18 points in the first half and led the Lady Raiders on an 8-0 run in the second quarter. That would be enough to lead SA to a 46-30 victory over Lee-Scott Academy, a school from Auburn, AL.

‘Today’s game was probably the best game that we’ve shot the ball in all year,” Southland head coach Ty Kinslow said. We got off to a good start. Once you start making some shots, that energy level goes up. On the defensive end, we really hunkered down. They’ve got a good offensive team. They’ve got a really good guard (Mary Mykal Prewett) that knows how to play. The girls did a good job of executing the defensive game plan. We got out on her and closed the driving lanes down. They tried to press us early on. We had great ball movement and shot a lot of layups early. We know it’s a growing process. We brought back some players, but we’ve got some younger girls stepping up. We’re starting to see improvement each game. We’re excited about that.” Kinslow also mentioned that Calyn Fort did an excellent job defensively on Prewett.

In addition to her 18 points, Williams had five rebounds, three steals and three blocked shots. Fort had a total of nine points. All of those points came off of three-pointers. Sydney Payne had six points and four steals, and Haleigh Warren had six points and six rebounds. 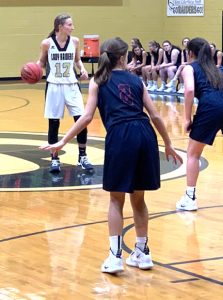 The Lady Raiders jumped out to a 5-0 lead. However, LSA responded with a 6-0 run of their own. Both teams struggled to score in the first quarter, but SA had a 9-6 lead by the quarter’s end.

The Lady Raiders went on an 8-0 run in the second quarter to take a 17-6 lead. Their defense was able to force LSA into committing turnovers. LSA used full-court pressure, but SA was able to pass through the Lady Warriors’ press and score on more than one occasion. 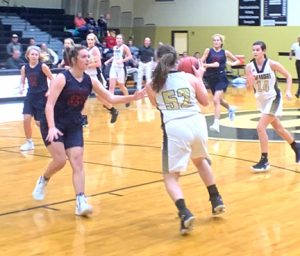 The Lady Raiders jumped out to a 15-point lead on a jumper by Sydney Payne, and went into halftime up 28-16. A turning point in the second quarter took place when the Lady Warriors’ Kenedi Cleveland was whistled for a technical foul. Williams hit both technical foul shots for SA. 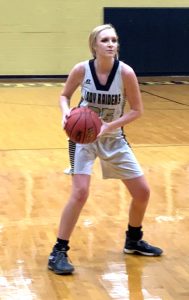 Southland guard Calyn Fort with the ball. Fort scored nine points on three shots from beyond the arc against Lee-Scott Academy.
Photo by Ken Gustafson

During the fourth quarter, the Lady Raiders had a comfortable lead and moved the ball around on offense to run some clock. The Lady Warriors were not able to cut the deficit below double digits. The Lady Warriors did not try to come out and foul to stop the clock, allowing SA to run more time off. With two minutes to go, Maddie Crisp was fouled while shooting. She made both free throws to give SA a 46-25 lead. SA went on to win 46-30 and improve their record to 5-1 on the season.

Up next for the Lady Raiders is a trip to Cordele, GA to take on Crisp Academy on Monday, December 10. Tip-off is scheduled for 6:30 p.m.

AMERICUS – The undefeated Americus-Sumter Panthers (6-0, 2-0) jumped out to a 16-9 lead in the first quarter and took... read more