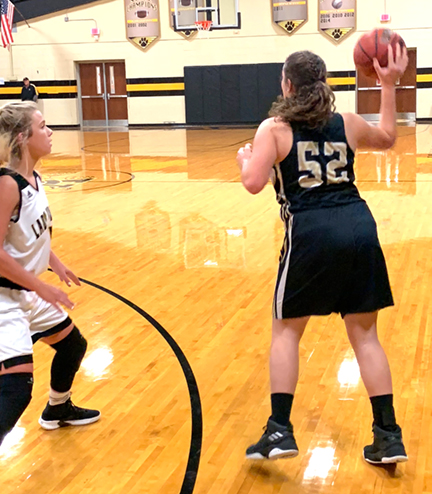 CORDELE, GA – The Southland Academy Lady Raiders (6-1) used full-court pressure in the first quarter to take a 17-0 lead and never looked back on their way to a 47-21 victory over the Lady Wildcats of Crisp Academy on Monday, December 10.

“We wanted to jump on them and work on our press and that’s what we did,” Southland head coach Ty Kinslow said. “We got off to a good start. Once we had the game in control, we just backed off and worked on some other stuff. Everybody got in the game and everybody scored. That’s just a good team win.” 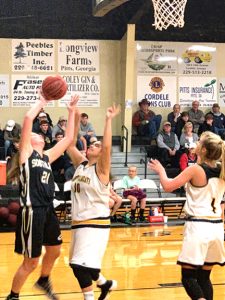 SA began the game by scoring 11-straight points, including a three-pointer by Fort. The Lady Raiders added to the lead on three-straight baskets by McCain, making the score 17-0 by the end of the first quarter. They amassed this large lead due to their full-court pressure, which disrupted the Lady Wildcats’ ability to get any rhythm on offense. SA’s press forced turnovers, and the Lady Raiders turned them into points. The Lady Wildcats had chances to score in the opening quarter, but missed some easy shots on the inside. CA didn’t score until the second quarter when Milani hit two free throws with 7:29 left in the first half. 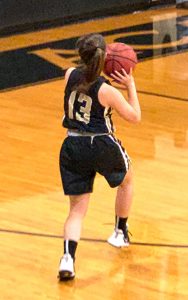 Southland guard Laney Griffin attempts a three-pointer. Griffin got a steal and scored on a layup near the end of the game.
Photo by Ken Gustafson

The Lady Raiders continued their onslaught in the second quarter and led 30-10 at halftime.

McCain led the Lady Raiders with 10 first-half points and Fort had eight. Milani scored six of her seven points in the first half for the Lady Wildcats. 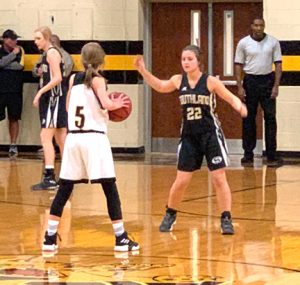 During the second half, the large lead allowed Kinslow to put in his reserves to give some valuable playing time. The reserves did not disappoint. In the fourth quarter, Lauren Griffin nailed a three-pointer, and her twin sister, Laney Griffin, got a steal and scored on a layup. The Lady Raiders went on to win 47-21.

Up next for the Lady Raiders is a home game against the Lady Hornets of Westfield on Friday, December 14. Tip-off is scheduled for 6:30 p.m.

CORDELE, GA – It was an extremely fierce and hard-fought battle between the Raiders of Southland Academy (5-0) and the... read more