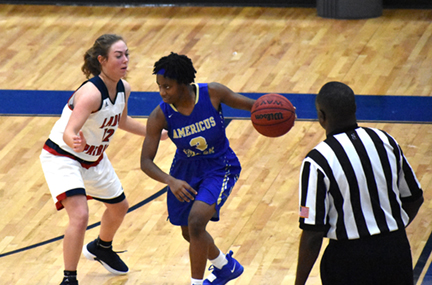 ASHS point guard Tiffani Goodman trying to push the ball up the court against Northside (Columbus). Photo by Coleman Price

COLUMBUS – After a 51-46 loss at Dougherty on Saturday, December 8, the Americus-Sumter Lady Panthers (5-2, 3-1) returned to form on Tuesday, December, 11, by traveling to Columbus and thrashing Northside (Columbus) 76-22.

Five players scored in double-figures for ASHS. DeAsia Ford and Brianna Pope each scored 15 points to lead the Lady Panthers. Tiffani Goodman scored 14. Destinee Sims had 13, and Banita Lee scored 10 points. Trinity Jackson almost reached the double-figure plateau in scoring. She had nine points to round out the scoring for ASHS. 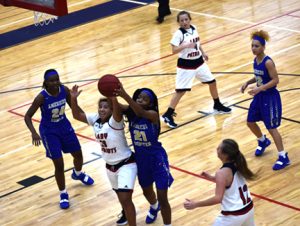 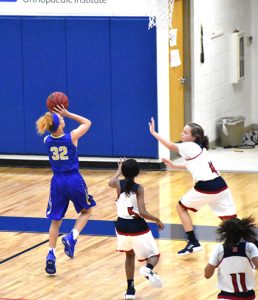 The Lady Panthers’ Banita Lee takes a shot. Lee scored 10 points in the win over the Lady Patriots.
Photo by Coleman Price

There was not much scoring in the final frame, but the Lady Panthers had the game well in hand by that time. The Lady Patriots were led in scoring by Erica Rodriguez with nine points. All of her points came from made three-pointers.

Up next for ASHS is a trip across Lake Blackshear for a rematch with Crisp County on Saturday, December 15. The last time these two teams met, ASHS overwhelmed the Lady Cougars 77-17 in a lopsided affair. Tip-off for Saturday’s game is scheduled for 6 p.m.