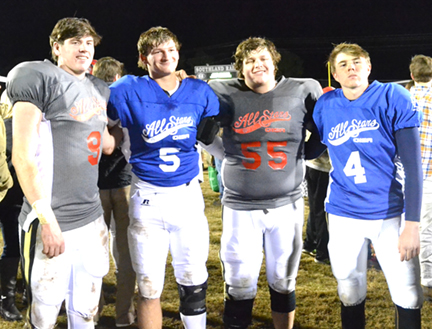 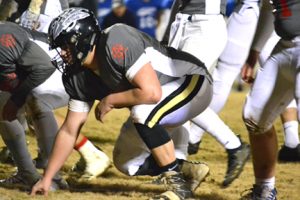 Four Raiders, all seniors,  played in the game as a reward for their accomplishments during the 2018 season: field goal kicker Zane Hines, defensive end Chandler Studdard, offensive lineman Ragan Norman and outside linebacker Parker Weldon. The game is for seniors only.

One team wore red jerseys while the other team wore blue. There were SA players on both teams. Each Raider had a solid performance in the game. Studdard and Weldon both had very good games on defense. Weldon also played slot receiver in the game for the blue team. Norman had a solid game at guard, and Hines kicked one extra point. The red team ended up winning 20-7. Spence Massey of Tiftarea scored two touchdowns for the red team in the win. 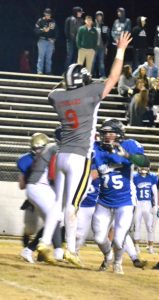 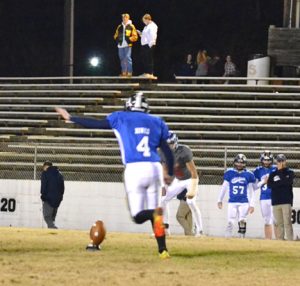 Next year, there is a good possibility that more SA players will be playing in the 2019 GISA Class AAA All-Star Game. Quarterback Landon Law, running back Clay Owens and middle linebacker Hunter McCain are all juniors. There is a good chance that all three, perhaps even more, will be in next year’s game. 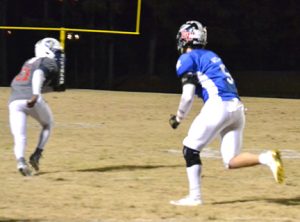 Southland outside linebacker Parker Weldon (#5 in blue) playing in the GISA Class AAA All-Star Game. Weldon played in the game as a slot receiver as well.
Photo by Eva Grace Studdard

Congratulations are in order for Weldon, Studdard, Norman and Hines for being chosen to play in the game and for their accomplishments as Raiders on and off the field.