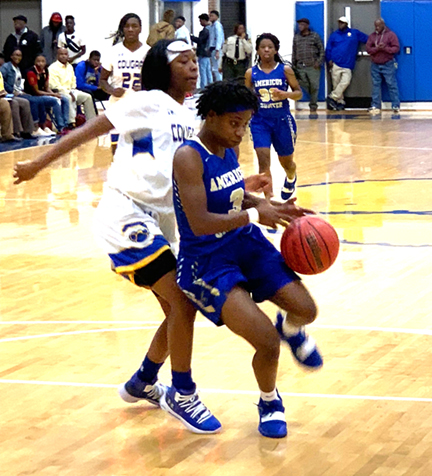 CORDELE – For the second time in a week, the Americus-Sumter (ASHS) Lady Panthers (6-2, 3-1) used their defense to score points off turnovers and roll Crisp County 62-4 on Saturday, December 15, at Crisp County High School (CCHS).

This is a traditional rivalry between these two schools, but this year, the pendulum has swung clearly in the direction of the Lady Panthers.

The Lady Panthers very nearly shut out the Lady Cougars (0-8). It wasn’t until CCHS guard Aaliyah Hardemon hit a free throw with 2:29 left in the game that the Lady Cougars knew that they wouldn’t have a goose egg on the scoreboard when the horn sounded to end the game. Hardemon then hit a three-pointer with under a minute. She accounted for all of the Lady Cougars’ four points. 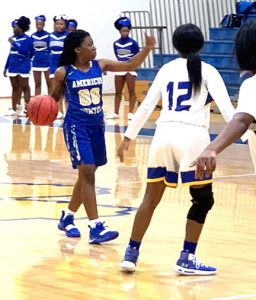 The Lady Panthers used full-court pressure in the third quarter and scored six more unanswered points. Peyton Bozeman had a chance at the free-throw line to give CCHS two points and avoid a shutout, but she missed both free throws. The Lady Panthers created another turnover, and Sims scored on a layup to make the score 41-0 ASHS with just under four minutes to play in the third quarter. 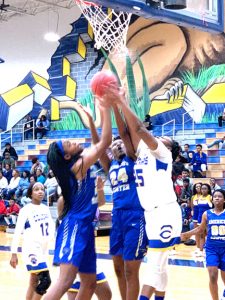 Americus-Sumter forward Brianna Pope (24), along with a teammate, fights for a rebound against Crisp County.
Photo by Ken Gustafson

As the third quarter was winding down, Adasia Lee had a chance to give CCHS its first two points of the game, but her layup attempt rolled around the rim and out. Meanwhile, ASHS ran off another eight points to take a 49-0 lead by the end of the third quarter. The Lady Panthers continued to take advantage of CCHS turnovers by scoring points off of those turnovers.

By this point, the third and fourth quarters had been shortened by two minutes according to Georgia High School Association (GHSA) rules. That elusive basket that CCHS was seeking finally came when Hardemon was fouled while shooting and made one of two free throws with 2:29 to go. When that took place, the crowd erupted. With under a minute to play, Hardemon nailed a three-pointer, causing the crowd to erupt again.

Up next for the Lady Panthers is a trip down to Cairo on Tuesday, December 18, for a Region 1-AAAA contest against the Lady Syrup Makers. Tip-off is scheduled for 6 p.m.