Southland senior Ragan Norman with his medal after winning Pod 285 A in the Glory Days Wrestling Tournament. Photo by Ken Gustafson

AMERICUS – The Southland Academy wrestling team hosted the Glory Days Tournament at Southland Academy on Saturday, December 15. At least 14 schools from around the state came to participate, which made for excellent competition. A few Raider wrestlers were awarded medals for their outstanding performances.

The tournament was a round-robin tournament with wrestlers put in groups called pods. Pods were determined by the different weight classes. Medals were awarded to the wrestlers who finished a top their respective pods. That was determined by how many matches they won. For Southland, they had four wrestlers win their individual pods.

Southland’s Tanner Humphrey with his medal after winning Pod 113.
Photo by Ken Gustafson

Eighth grader Tanner Humphrey finished first in Pod 113, thus winning a medal. Humphrey won four matches, enough for him to win the pod and the medal. 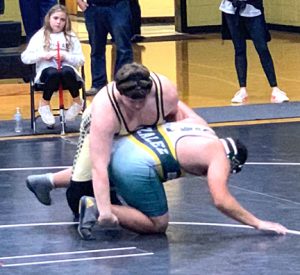 Senior Ragan Norman won three matches in Pod 285 A, which was enough for him to win the pod and a medal. In his second match, Norman defeated Jesus Gonzalez of Bulloch Academy. “He went in for a shot. I sprawled and got control of him,” Norman said. “He got my leg and I put a three-quarter on him.” 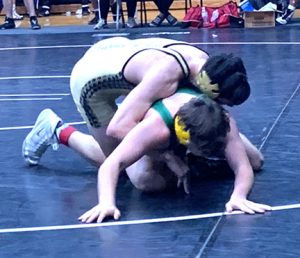 Southland’s Cole Landreth winning one of his matches on his way to winning Pod 152.
Photo by Ken Gustafson 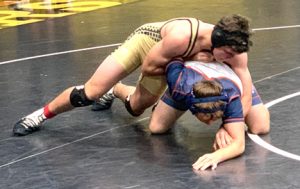 Southland’s Tyler Kennedy did not win his pod, but here he is winning one of his matches.
Photo by Ken Gustafson

“It was a good day all across the board. All of the wrestlers that came in here have been working hard,” Southland wrestling coach Mike Smith said. “They’ve been working hard for the last three or four weeks. They finally had an opportunity to get on the mat. I felt like we wrestled as well as we could. With the Christmas break coming up, it’s one of those situations where we just want to have a good start. We now have that. Hopefully, when we get to January, we can get to our weight classes, get better and get ready for State.”