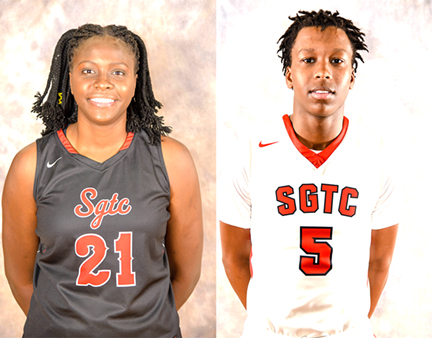 Bigue Sarr, 21, posted two double-doubles in wins against Andrew College and East Mississippi and then Justin Johnson, 5, had a total of 30 points in the Jets’ two games. Photo by SGTC

SGTC’s first opponent in the tournament was East Mississippi Community College (EMCC). The Lady Jets defeated them 69-56 on Friday, December 14. It was their 11th-straight victory.

While the Lady Jets were in Marianna, the SGTC men’s basketball team was up the road in Panama City, FL to take on Gulf Coast Community College. The Jets came away with a 76-70 win at GCCC on Friday, December 14. With that win, the Jets improved to 3-8 on the season. Unfortunately, they were not able to sustain a winning streak as they fell to Chipola College 89-56 on Saturday, December 15, in Marianna, FL. From there, they traveled to Marion, AL to take on Marion Military Institute on Monday, December 17. Unfortunately for the Jets, the lost to MMI 69-57. The Jets are now 3-9 on the season.

As for the Lady Jets, their next opponent will be a Georgia Collegiate Athletic Association (GCAA) game against East Georgia State on Wednesday, December 19, at the Hanger at 2 p.m. They are currently ranked 16th in the nation in the most recent NJCAA Division 1 top 25 poll. They are currently undefeated in conference play at 5-0.

In their most recent win over EMCC, the Lady Jets led 25-23 at halftime, but outscored EMCC 21-14 in the third quarter. They would not relinquish their lead and went on to win 69-56.

In that game, Bigue Sarr had a double-double, scoring 16 points and grabbing 13 rebounds. Rio Yamazaki chipped in eight points in the winning cause.

As for the Jets, they will host the Jets Classic Saturday through Monday, December 29-31. Their first opponent will be Shelton State on Saturday, December 29, at 2 p.m.