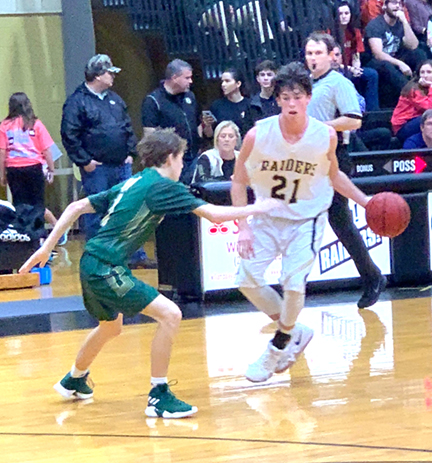 AMERICUS – The Southland Academy Raiders wasted no time in taking control of the game early by outscoring Westfield 13-2 in the first quarter. However, they were outscored 19-13 in the third quarter by the Hornets and had to battle the rest of the way to come away with a 48-36 win in a very physical game played on Friday evening, December 14, at Southland Academy (SA).

“It was a very physical game, but Westfield is well coached,” SA head coach Rundy Foster said. “They’re going to play very hard and they’re a good defensive team. In order to be a good defensive team, you’ve got to be a little physical. You’ve got to bump people out of their comfort zone. That’s just basketball. Westfield always plays hard. It’s always going to be a battle.”

While Foster was happy with the win, he was disappointed with the number of turnovers the Raiders committed against the Hornets. “I think we need to do a better job. We had 18 turnovers on the night,” Foster said. “We could do a better job in that area. With that being said, we have some young kids in there that don’t have a lot of varsity experience, but they’re doing a great job. They’re working hard. I’ve told them that if they work hard, I’m behind them. That’s all I can ask out of them. I think the offense will come. The defense is playing well, and defense takes precedent over the offense right now. The offense is going to come. It’s just going to take a little bit of time.” 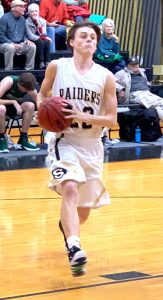 Chandler Studdard led the Raiders in scoring with eight points and both Owen Hufstetler and Luke Law each scored seven. There was balanced scoring throughout the Raider lineup. Adam Smith, Nathan Duke, Landon Law and Max Foster each scored five points. Hunter McCain scored four and Gabe Roland rounded out the scoring with two points.

The Hornets were led in scoring by Garan Daw, who led all scorers with 18 points.

The Raiders quickly jumped out to a big lead in the first quarter. Hufstetler nailed a three-pointer to score the first points of the game. That sparked a 10-2 run by the Raiders to put themselves up 13-2 by the end of the first quarter. Studdard, Duke and McCain, along with Roland, each scored baskets in the quarter to contribute to SA’s offensive explosion.

Things calmed down in the second quarter as the Hornets outscored the Raiders 7-6. However, SA went into halftime up 19-7.

The Hornets went on an 11-5 run to begin the second half, capped off by a three-pointer by Daw to cut the Raiders’ lead to 24-18. However, the Raiders responded when Duke scored and was fouled. He hit the free throw to push SA’s lead back up to nine at 27-18.

However, the Hornets countered with a 4-0 run of their own, capped off by a basket from Beck Beckham. At this point, the Raiders led 27-24. Adam Smith was able to knock down a three-pointer near the end of the third quarter to give SA a 32-26 lead going into the final frame. 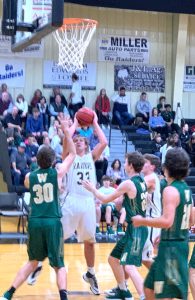 With under six minutes to go, the Raiders led 36-26. The Hornets tried to create a turnover with their high-pressure defense, but the Raiders were able to break through it and Studdard scored on a layup. However, the Hornets responded with a 5-1 run, prompting Foster to call a timeout to settle his club down.

Out of the timeout, SA scored four unanswered points to take a 42-31 lead. With 2:03 to go, Studdard was fouled while shooting and made one of two free throws. The Hornets went through an offensive cold spell late in the game. They were unable to score until Daw hit a three-pointer with 1:24 to go. At that point, the Raiders led 44-34.

The Hornets applied full-court pressure on the Raiders’ next possession, which forced a turnover. The Hornets were able to force another turnover from the Raiders and capitalized with a basket by J.B. Bearden with 39.1 seconds to go. The Hornets continued to press in hopes of getting more turnovers and converting them into points. However, Duke was fouled with 31.4 seconds to go and made both free throws. McCain was able to hit two free throws with 17.9 seconds left to give the Raiders a 47-36 lead. Landon Law made one of two free throws near the very end to make the final score 48-36 in favor of the Raiders.