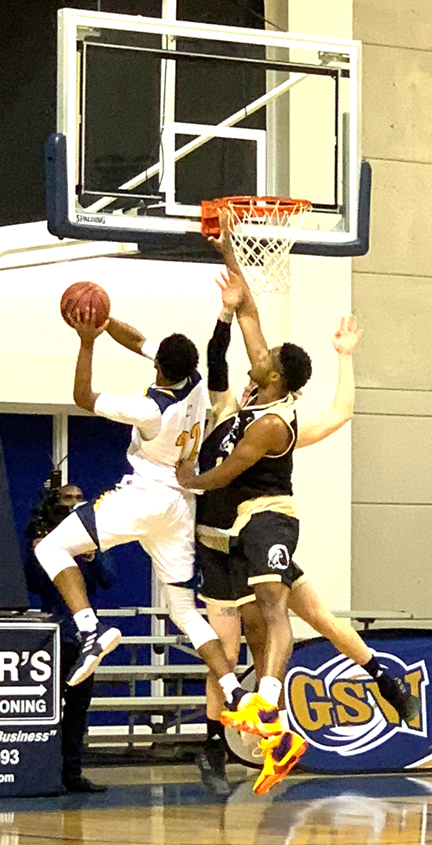 GSW forward Jalen Morgan goes up to score. Morgan led the Hurricanes with 17 points against UNCP. Photo by Ken Gustafson

AMERICUS- It was not a good day for the Georgia Southwestern State University men’s basketball team. The Braves of the University of North Carolina Pembroke (8-1, 3-0) defeated GSW in dominating fashion by the score of 97-57 on Wednesday, December 19, at the Storm Dome.

The Braves are the two-time defending regular season and conference tournament champions of the Peach Belt Conference.

GSW head coach Ben Hicks was extremely disappointed with his team’s effort and performance, and was apologetic to the university, the fans and the community for his team’s play on the court. “Nobody deserves this. The fans don’t deserve this. It’s a waste of their time. The community doesn’t deserve this,” Hicks said. “Dr. Weaver put so much money into this program. They don’t deserve this effort. I’m doing a poor job right now as the basketball coach at Georgia Southwestern. That’s the first time I’ve said this in my career.” 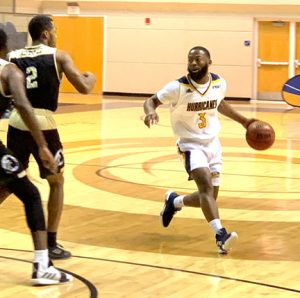 Three players were in double-figures for GSW (2-7, 0-3). Jalen Morgan led the Hurricanes with 17 points. R.J. Sessions had 15 and Devin Watson scored 10 in the losing cause. The Hurricanes turned the ball over 21 times, while the Braves only had seven turnovers. UNCP scored 22 points off GSW turnovers. That turned out to be a major factor in the game. The rebounding margin was close, with UNCP having outrebounded GSW 29-24 for the game. However, the Braves scored 44 points in the paint to the Hurricanes’ 24. UNCP also had a decisive advantage in bench scoring. The Braves got 51 points from their bench, while the GSW bench only scored seven points.

For UNCP, they had four players in double-figures. Cam Hamilton led the Braves in scoring with 17 points and was a perfect 5 for 5 from the three-point line. Akia Pruitt scored 14 points. Both James Murray-Boyles and Spencer Levi scored 12 points and Carson Mounce scored 11.

Both teams were evenly matched for the first 15.5 minutes, with UNCP leading 13-11. 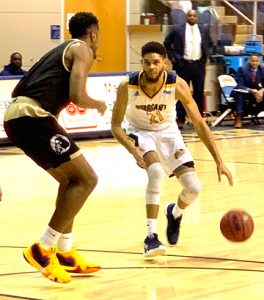 GSW guard Devin Watson with the ball trying to drive on the UNCP defender. Watson scored 10 points in the Hurricanes’ loss to the Braves.
Photo by Ken Gustafson

GSW struggled with turnovers in the first half. This was partly due to the strong defense played by the Braves. With 8:30 to go, Mounce scored on a hook shot and was fouled to give the Braves a 27-19 lead. However, a technical foul was called against GSW. David Strother made both technical foul shots for the Braves, followed by another foul shot made by Mounce.

With a little over seven minutes left in the first half, Morgan scored to cut GSW’s lead to 31-21. Sessions was able to follow with a basket on the inside to cut the deficit to eight. Morgan was fouled on the Hurricanes’ next possession, but could only make one of two free throws.

With the Hurricanes down 34-24, Watson hit a jumper to cut the deficit to eight with 4:45 to go in the half. However, with 3:47 to go, Pruitt scored on the inside. Pruitt was fouled, but missed the free throw. However, the ball went out of bounds off the hurricanes on the miss. This allowed Levi to score on the Braves’ next possession to give them a 12-point lead.

Quenten Taylor was able to get a steal and give GSW a basket, but the Braves went on a 5-0 run to increase their lead to 15 at 43-28. Turnovers continued to hurt the Hurricanes in the first half and the Braves were able to score as a result. By halftime, UNCP had a 47-28 lead over GSW.

The Hurricanes got off to a good start to begin the second half. They went on a 6-0 run, capped off by a three-pointer by Watson. However, the Braves responded by scoring five-straight points to go back up 52-34.

The Hurricanes tried full-court pressure, but the Braves were able to break it easily. With UNCP up 54-37, Levi scored on the inside and was fouled. Levi missed the free throw, and Grant Howard was able to score for GSW on the other end to cut the deficit to 56-39. With 13:32 to go, Micah Kinsey nailed a three-pointer to give the Braves a 60-41 lead. Howard responded for GSW with a basket, but Murray-Boyles responded with another three-pointer for UNCP. Mounce then scored on the inside, and the Braves led by 22 points with under 12 minutes to play. 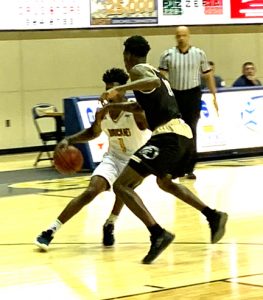 GSW guard R.J. Sessions tries to get past his defender. Sessions scored 15 points against UNCP.
Photo by Ken Gustafson

Sessions was fouled while shooting and was able to make both free throws. The Hurricanes were trying to make a run in the final 11 minutes, but the defense of the Braves on the inside and out caused problems for the Hurricanes offensively, as it had done all game.

With 9:08 to go, the Braves applied full-court pressure, created a turnover and got a basket by Strother to increase UNCP’s lead to 69-45.

The Braves continued to force turnovers against the Hurricanes and made GSW pay on the other end with points. By the 7:55 mark, UNCP led 71-45. The Hurricanes had chances to score with a little over seven minutes left, but missed some easy shots on the inside. GSW turned the ball over again, and Pruitt scored on a slam dunk at the other end to put UNCP up by 30 at 75-45. The Braves went on a 7-2 run to extend their lead to 82-47 with 3:37 left.

Near the end of the game, Sessions knocked down two three-pointers, but the outcome had already been decided as the Braves went on to win 97-57.

The Hurricanes will use the Christmas break to recover before they travel to Greenwood, SC on Saturday, January 5, to take on PBC opponent Lander University. Tip-off is scheduled for 3:30 p.m.