Lady Wildcats’ swarming defense too much for Chattahoochee County 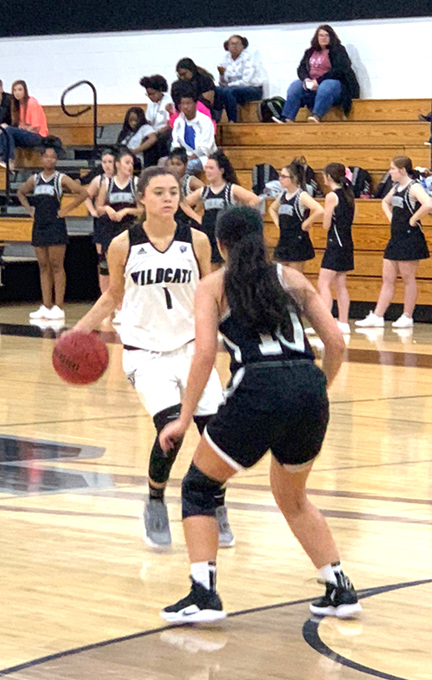 The Lady Wildcats were coming off a hard-fought 41-37 win over Mt. Zion in their first game of the tournament on Friday, December 28.

“Coming back off the Holidays, we started slow,” SC head coach Cliff Royal said. “Today, I got a lot of my younger kids in. That was the idea: To get some of my ninth-graders some experience.”

Both Carmen Phillips and Dasani Minter each scored 22 points to lead the Lady Wildcats. Emily Campbell chipped in five points. Berkley Goodin scored two and both Patience Solomon and Maddie Tobin each made a free throw. Royal said that Minter also grabbed either 14 or 15 rebounds against the Lady Panthers, which would give her a double-double for the game.

Ally Barajos led the Lady Panthers in scoring with 17 points. 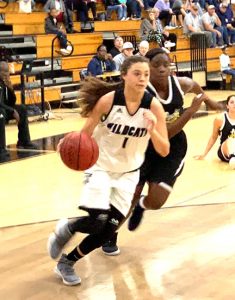 Carmen Phillips drives to the basket and scores.
Photo by Ken Gustafson

Minter scored 15 of her 22 points in the first half. Phillips scored 11 first-half points to help pace Schley County. 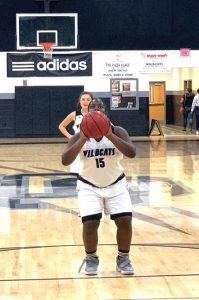 Ally Barajos nailed a three-pointer to get the Lady Panthers to within 14, but the Lady Wildcats responded with a 9-0 run to take a 39-16 lead with 4:59 left in the third quarter. With a little over four minutes left, Phillips hit a three-pointer to put Schley County up 42-16. Not even a minute later, Phillips hit another shot from beyond the arc. At this point of the game, the Lady Wildcats were in total control as they led 47-18 with 2:19 to go in the third quarter.

However, Phillips was whistled for a technical foul. Barajos made one of the technical foul shots. The technical did not change the momentum of the game as the Lady Wildcats continued to impose their will, both offensively and defensively.

By the end of the third quarter, Schley County led 51-21. 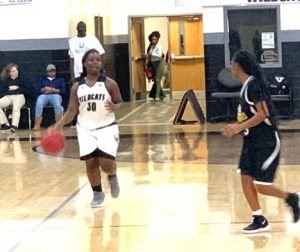 The large lead allowed Royal to give his reserves some valuable playing time in the fourth quarter, and the Lady Wildcats went on to win 53-28.

“We played good. We just have to work harder and keep grinding,” Minter said. “We need to do a better job of making layups and free throws.”

The Lady Wildcats return to action on Friday, January 4, when they host Region 4-1A opponent Marion County.