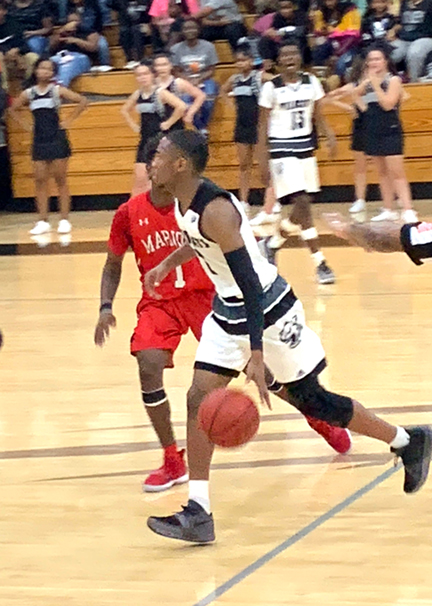 ELLAVILLE – The atmosphere was a raucous one. An atmosphere one would expect in a fierce rivalry. Schley County (SC) and Marion County slugged it out for 32 minutes. However, though they came back from being down by a double-digit margin, several missed free throws by the Wildcats down the stretch ended up being the difference as Marion County (MC) won 70-66 on Friday, January 4, at Schley County High School.

“The most challenging aspect of this game was getting down by 15 or 20 points early in the game and trying to keep the kids focused about battling to get back into the ball game, which they did,” Schley County head coach Ernest Scott said. “We made it a game. I think that was the most challenging part because we’ve never been down by that much before. They got refocused, came back out and made it a ball game. Down the stretch, we’ve got to make free throws. You can’t go 24-for-42 from the line and expect to win. If you shoot 70 percent from the line as a team, you have a chance, but to go and miss 18 free throws down the stretch, or for the game, that’s tough with a game like that.” Scott went on to say that Marion County shot the ball really well from the outside. “They spread out a little bit with their guards. We sort of made it tough because then we had to go small to try to match up,” Scott said. “For the most part though, I thought we played well. I wasn’t upset with their effort to get back in the ball game. We still have to learn how to close out games.” 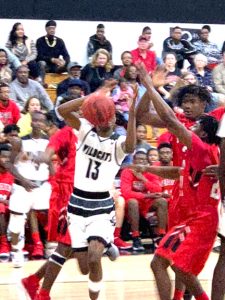 The Wildcats had three players score in double-figures. Zykevious Walker led Schley County with 15 points and Dylan Taylor had 12. De’onte Cross scored 10 points and JyQuavious Pitts chipped in nine in the losing cause.

For Marion County, they were led in scoring by Markevious Kelley with 33 points. Kelley hit eight three-pointers against the Wildcats. KD Mitchell also was in double-figures for MC. He scored 16 points.

The Wildcats went on a 9-3 run to cut the Eagles’ lead to 25-17 in the second quarter, but the Eagles responded with a 6-1 run of their own, capped off by a basket by Josh Rodgers to increase their lead to 31-18 with 4:17 left in the first half.

The Wildcats would not quit, however. They scored nine unanswered points, capped off by a layup by Dylan Taylor to cut MC’s lead to 31-27 with 1:12 left. Both teams traded baskets for the remainder of the half. By halftime, SC only trailed 35-31. The Wildcats had fought back from a double-digit deficit to make it a ball game in a true rivalry game.

The Wildcats were led in the first half by Dylan Taylor with eight points. Kelley was on fire for the Eagles. He scored 16 first-half points, including four three-pointers. 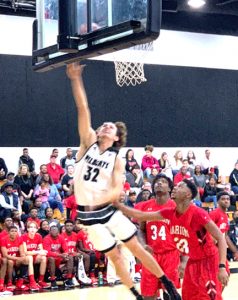 Schley County center Ashton Goodin goes in for a layup against Marion County. Goodin scored six points in the loss to the Eagles.
Photo by Ken Gustafson

The Eagles outscored the Wildcats 11-6 in the first few minutes of the third quarter, but Walker was able to score to cut the deficit to 46-39. However, Rodgers electrified the MC fans with a dunk to put the Eagles back up by eight. With a little over two minutes left in the third quarter, Walker found a wide-open JyQuavious Pitts for a layup to bring the deficit back to eight at 49-41. The Wildcats cut the lead to six when Tra Sampson drove to the basket and scored. KD Mitchell responded for the Eagles with a basket of his own with under a minute left in the third quarter. MC held the ball for the last shot, and Akem Slaughter scored on the inside a few seconds before the horn sounded to give the Eagles a 53-43 lead to start the final eight minutes.

The Wildcats got the ball inside to Walker, who was fouled. Walker made both free throws, cutting SC’s deficit to eight at 53-45. However, Slaughter scored again to put the Eagles back up by 10 with 7:10 left in the game. The Wildcats scored three unanswered points, capped off by two free throws from Dylan Taylor. SC had a chance to cut the Eagles’ lead to three, but Ashton Goodin missed a dunk. However, about a minute later, Walker scored, was fouled and made the free throw, cutting MC’s lead to 57-53. The Eagles responded once again when Kelley hit another three-pointer to put MC up 60-55. Coach Scott called a timeout to settle his club down. Out of the timeout, both teams traded baskets, and the Eagles led 62-57 with a little over three minutes left in the game.

At the 3:11 mark, Walker was fouled while shooting, but couldn’t make the free throws. Then Kelley hit another three-pointer to put the Eagles up by eight at 65-57.

However, Walker would get another chance at the line. This time, he made one of two free-throws. However, SC would get the rebound off the miss, and Jordan Taylor was fouled. Taylor made both free throws. At that point, MC led 65-60.

MC responded when Kelley drove to the basket and scored, making the score 67-60 in favor of the Eagles.