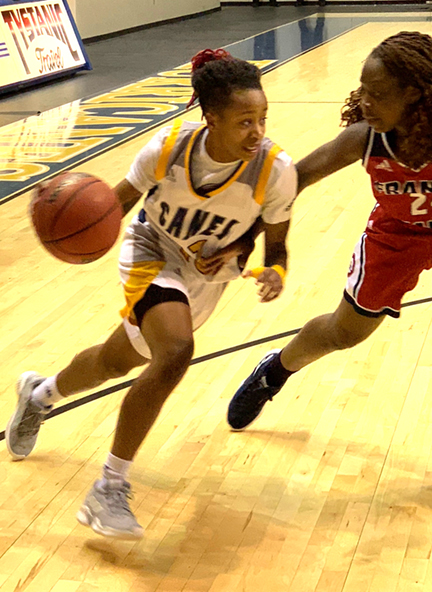 GREENWOOD, SC – It was a rough day for the Georgia Southwestern State women’s basketball team (4-6, 1-3) as Lander University’s Tabitha Dailey scored 33 points to lead the Lady Bearcats to a 91-53 win over the Lady Hurricanes on Saturday, January 5, at Finis Home Arena on the Lander University (LU) campus.

The Lady Hurricanes struggled offensively throughout the game due to the full-court press of the Lady Bearcats. LU also controlled everything on the inside, scoring 60 points in the paint.

Things started off well for GSW as Tamecia Blue stole the ball off of a jump ball and scored on a jump shot to give the Lady Hurricanes a 2-0 lead. However, things went in a downward direction from there.

LU (8-4, 5-1) went on a 10-2 run early in the first quarter. The Lady Hurricanes cut the deficit to 10-8 when Madison Johnson scored on a layup with 7:10 left in the quarter. GSW’s Lex Chapman hit a three-pointer, but the Lady Bearcats responded with another 10-point scoring run to end the first quarter with a 32-17 lead.

In the second quarter, Lele Young put GSW to within 10 points when she nailed a three-pointer. At that point, GSW trailed LU 35-25 as the Lady Hurricanes were trying desperately to get back in the game. Both teams went on a two-minute scoring drought near the end of the first half before Mariya Trimble ended the drought with a layup to pull GSW to within 13. However, the Lady Bearcats would lead GSW 49-32 at the half.

GSW’s bench outscored the LU bench 33-22, but struggled with only 18 points in the paint. The Lady Hurricanes were also outrebounded 52-35.

Tyra Smith led GSW with nine points and eight rebounds while Young scored eight points and grabbed six rebounds. Blue and Brianna Perry each scored seven points for GSW in the losing cause.

The Lady Hurricanes will try to rebound from this loss when they travel to Milledgeville, GA on Wednesday, January 9, for a noon tip-off against Georgia College.