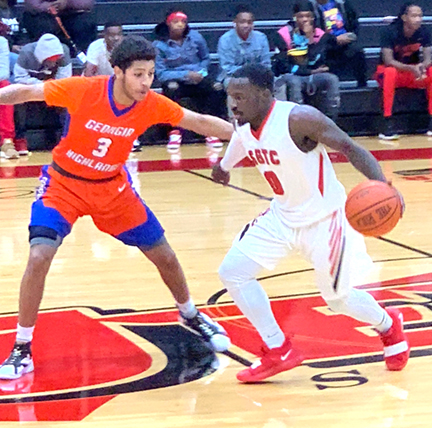 AMERICUS – If one did not know that the South Georgia Technical College men’s basketball team was 4-12 overall on the season before they faced Georgia Highlands College on Wednesday, January 9, one would not believe that Jets had such a poor record based on the way they played against the Chargers, who came into this Georgia Collegiate Athletic Association (GCAA) matchup with an overall record of 13-2. However, the Jets made the necessary plays down the stretch to pull out a 93-89 upset win over the Chargers on Wednesday, January 9, at the Hangar on the SGTC campus.

While he was happy with the win, SGTC head coach Travis Garrett knows that his team has gone through some rough times and still has a long way to go.

“This has been a very, very turbulent season…a turbulent season to say the least,” Garrett said. “I thought maybe we had turned the corner because of the tough schedule that we played prior to conference play. However, I’m still seeing some of the same stuff that is hurting us. We just have to learn how to compete and learn everything about the facets of college basketball from scouting reports to attention to details to making sure that when you get on the floor, you know your assignments. We’ve got a long way to go. We’ve got guys that have mental lapses and can’t make simple layups. Those are things I can’t control. We work on them every day. It’s a mental game.” 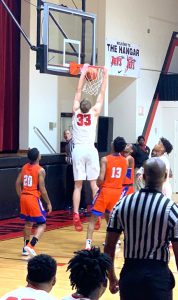 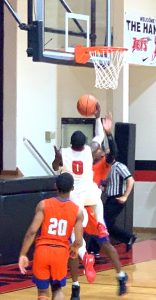 Dijon Brown drives in for a layup against Georgia Highlands.
Photo by Ken Gustafson

SGTC jumped out to a 10-0 lead early in the game, prompting a timeout by GHC coach Phil Gaffney. However, that didn’t stop the momentum of the Jets. SGTC proceeded to outscore the Chargers 22-8 over the next several minutes of the first half to take a 32-18 lead. However, the Chargers made a run to cut the Jets’ lead to 37-29 before Matice scored on a layup with 5:03 to go in the half. After another timeout by the Chargers, both teams traded baskets, with the Jets maintaining a 43-36 lead.

With 3:04 to go in the first half, Carl Johnson scored for GHC to bring the Chargers to within four at 43-39. However, Matice scored on the other end to put the Jets back up by six.

The Chargers answered by scoring five unanswered points, capped off by a three-pointer by Johnson to cut the Jets’ lead to 45-44. Johnson then hit two free throws to give GHC their first lead of the game with 19.6 seconds left. Johnson scored again to give the Chargers a 48-45 lead. SGTC freshman guard Toriano Lewis’s three-point attempt at the buzzer was off the mark, and the Chargers had come back from 14-points down to take a 48-45 halftime lead. 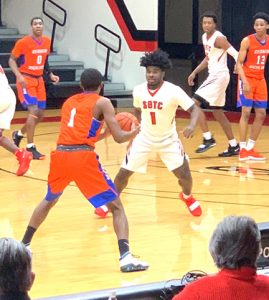 During the first four minutes of the second half, both teams traded baskets. However, with the score tied at 53-53, the Jets scored five unanswered points, capped off by a three-pointer by Justin Johnson. Nick Cummings increased the Jets’ lead to seven when he was fouled and made both free throws.

The Chargers tried full-court pressure against the Jets, but SGTC was able to pass the ball through the press and get an open layup by Jonathan Tchuisse. With a little over 11 minutes left in the game, the Jets were able to get the ball into Matice. The sophomore power forward from Canada did not disappoint as he scored on a two-handed slam. With less than 10 minutes to go, SGTC had a 68-62 lead.

GHC’s Derrick Cook was fouled and made one of two free throws. However, Johnson scored on a layup with 8:10 to go to give the Jets a 70-63 lead. The Chargers responded when Carl Johnson drove through the SGTC defense and scored to cut the Jets’ lead to five. 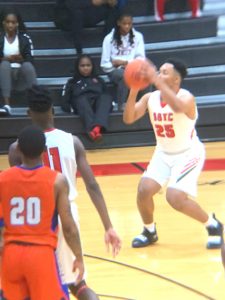 With just under seven minutes left, SGTC was leading 70-67 before Khalyl Waters hit a jumper to bring the Chargers to within one at 70-69. However, the Jets responded by going on a 6-2 run over the next minute to take a 76-71 lead. It was a back-and-forth affair between both teams during the last five minutes. With 3:24 to go, Jaylan McKinney scored on a layup for the Jets. Then Lewis hit a three-pointer to give SGTC an 85-80 lead with 2:30 to go. With a minute left and the Jets leading 87-83, Lewis scored on a layup to give SGTC an 89-83 lead.

GHC cut the lead to three on a three-pointer by Chris Wright. The Jets responded at the other end when Cummings was fouled and hit both free throws. However, GHC wasn’t going away. With 13.5 seconds left in the game, Cook hit a three-pointer, bringing the Chargers to within two at 91-89. Justin Johnson was fouled immediately on the inbounds pass. The game would be decided on free-throw shooting. Johnson stepped up and made both free throws, securing the 93-89 upset win for the Jets.

“I’m so glad we got the win because we desperately needed it in the worst way,” Garrett said. “I hope this win energizes us. We have a week off before we play at Southern Crescent. I’m going to give them a day off and then get them back in and get them prepared. That’s the only thing I can do. Hopefully, this win will get us going.”

With the win, the Jets improve to 5-12 overall and 1-2 in the GCAA. GHC falls to 13-3 overall and 1-1 in the GCAA. The Jets will travel to Griffin, GA on Wednesday, January 16, to take on Southern Crescent Technical College. Tip-off for that game is scheduled for 7:30 p.m.

AMERICUS – It was everything one would expect between the top two teams of the Georgia Collegiate Athletic Association (GCAA).... read more