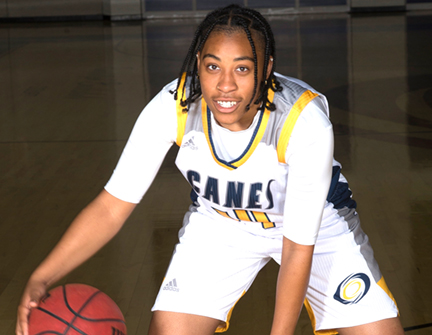 MILLEDGEVILLE, GA – GSW guard Morgan Towells finished with her first career double-double by scoring 17 points and grabbing 14 rebounds to lead the Georgia Southwestern State University women’s basketball team to a 64-63 overtime victory over the Lady Bobcats of Georgia College on Wednesday, January 9, at the Centennial Center on the GC campus.

In the overtime session, Towells nailed a three-pointer before the Lady Bobcats could get on the board. Both teams traded baskets to push the score to 59-58 in favor of GSW with three minutes left.

Coming out of a timeout, Biranna Perry hit a three-pointer and followed that up with a layup to push the Lady Hurricanes’ lead to 64-59 with one minute left in overtime.

On GC’s next possession, the Lady Bobcats answered. Due to a missed free throw by the Lady Hurricanes, they were unable to put the game out of reach. GC answered with another basket to cut GSW’s lead to 64-63 with 11 seconds left. The Lady Hurricanes had a chance to extend their lead, but missed two free throws. However, they were able to keep the Lady Bobcats from scoring the winning basket and held on for the 64-63 win.

The Lady Hurricanes had a chance to win the game in regulation. Perry hit a three-pointer with 22 seconds left in regulation to cut GC’s lead to 54-53. On their next possession, the Lady Bobcats turned the ball over and fouled GSW guard Kris Beckham. Beckham had a chance to win the game for the Lady Hurricanes by making two free throws. However, Beckham was only able to make one of them, sending the game into overtime.

To start the game, the Lady Hurricanes jumped out to a 10-3 lead and finished the first quarter leading 22-18. GC clawed their way back in the second quarter and tied the game at 22-22 with 8:12 left in the first half. GC took a 26-24 lead, but Towells was able to tie the game on a layup with five minutes left in the first half. However, the Lady Bobcats took control by going on a 9-3 run to take a 35-29 halftime lead.

The Lady Hurricanes will try to nail down another win when they play their first home game of the new year against Young Harris College (3-9, 1-5 PBC) on Saturday, January 12, at 1:30 p.m.