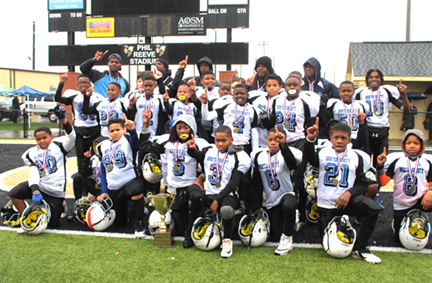 AMERICUS — The Sumter County Parks and Recreation Department (SCPRD) 10u all-star football team was honored with a special proclamation at the Sumter County Board of Commissioners (BOC) monthly work session on Tuesday.
The team won the Georgia Recreation and Parks Association (GRPA) State Championship by beating the 10u Calhoun, GA All-Stars 28-6 on Dec. 8, in Calhoun. 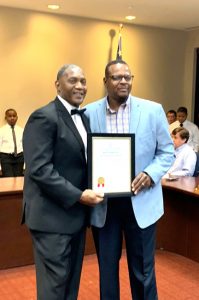 Commissioner Clay Jones, who is currently presiding as acting chairman of the board, made an official proclamation honoring the players, coaches, SCPRD Athletic Manager Dwight Harris and SCPRD Director Tim Estes for all they did to make this accomplishment a reality. Jones presented a proclamation plaque to Harris. Then each team member was presented with a certificate of proclamation.
The board heard from residents who live on Faircloth Road in Leslie. Geraldine Cherry expressed to the board that she, along with the other Faircloth Road residents, have been trying since 2010, to get the county to come out and fix the road. “We have gone into our own pockets. We’ve bought gravel to try to fix the problem on that road and we paid people to fix the road, but that short-term solution didn’t last very long because we didn’t have the money to get everything that we needed,” Cherry said. “We signed forms and sent them to the county, but we never heard anything from them.”
Cherry’s daughter, Mattie Smith, explained to the board that if an emergency was to arise, the ambulance or fire truck would have a serious problem going down Faircloth Road because of the heaviness of the vehicles. “They would get bogged down. They could not help us and that would be tragic,” Smith said. “We have plenty of pictures for you to see. It’s not an exaggeration. It is sincerely a problem.” Smith said the residents tried things such as wood chips, tin, gravel, and sand, but nothing worked.
Cherry told the board that former Board Chairman Randy Howard told her and the other residents that they needed to sign several documents. She said that Howard told them that after they did that, the county would come out and fix the road. “We signed I don’t know how many papers and brought them to the courthouse, but nothing came of it,” Cherry said. Rena Watts, another Faircloth Road resident, said the residents were told to sign a petition for the county to take ownership of the road, which they did back in 2010. County Department of Public Works Director Frank Whitaker replied that since 2010, there has been a new procedure adopted by the board that lays out the criteria of what the property owners have to do to get the county to accept the road. “The Road Department is set up to maintain existing roads,” Whitaker said. “We’re not in the road building business. We maintain a road once it’s established.”
Acting Chairman Jones explained to the residents that when they bought property on that road, it was a private road, but the developer never developed the road up to specifications so the county could take it over.
Smith said that this was the first time she had heard of the procedure explained by Whitaker. “We came here under the same assumptions that everyone else has been telling us. All the homeowners signed a petition and we were told that we wouldn’t have to worry about anything,” Smith said. “Somebody dropped the ball somewhere because I’m hearing from him (Whitaker) as if we should know this.”
Smith said that what Whitaker was explaining to her and the other residents in the chamber was not explained to them in 2010. Commissioner Mark Waddell asked the residents if all of them signed the petition in 2010. They all replied that they did. Smith reiterated that she, along with the other residents, went along with what Howard told them and that he didn’t take the time to explain to them what Whitaker was now telling them. “It’s not that we’re not receiving this new information. It’s the fact that no one told us about it,” Smith said. Commissioner Waddell asked the residents if they kept any copies of the signed petitions. Watts replied that she kept a copy of the one signed in 2010. Waddell told the residents to allow the board to see the signed petition for themselves. “We have to look at what we have and then go from there,” Waddell said.
The board approved the construction of a 415.73-acre solar farm to be built by Krueger Energy North Sumter, LLC at 1400 Ga. Highway 49 North in Andersonville. There was much discussion about the proposed solar farm at the board’s monthly meeting on Dec. 18. Commissioner Waddell made a motion to approve its construction and Commissioner George Torbert seconded. It passed unanimously. However, the BOC approved the proposal with these conditions:
1. The vegetative buffer around the solar farm will be extended along Ga. Highway 49 down to Old Stage Road.
2. The vegetative buffer will be five-feet high at the time it is planted.
3. The material of the buffer will be of a nature that is satisfactory to Code Enforcement.
4. The trees making up the vegetative buffer will be staggered to visually screen the farm as reasonably as possible as determined by Code Enforcement.
5. The vegetative buffer will be installed at the same time that construction of the solar farm begins.
The board also approved changing the date of its February work session from Feb. 12 to Feb. 5 due to scheduling conflict with the co-county administrators, Rayetta Volley and Janice Jarvis. Waddell made a motion for approval and Torbert seconded it. It passed unanimously.