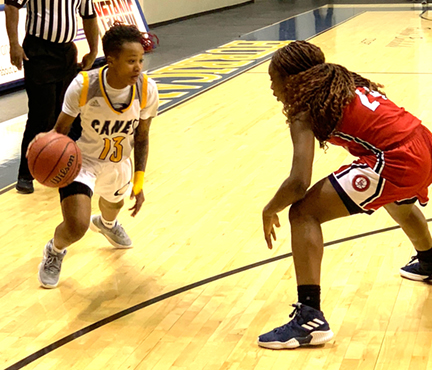 AMERICUS – The Georgia Southwestern State University women’s basketball team opened the Storm Dome for the first time in 2019 with a dominating 70-55 Peach Belt Conference victory over Young Harris College on Saturday, January 12. They did it primarily through high-pressure defense, forcing turnovers and three-point shooting.

In the opening two minutes of the second quarter, both teams were scoreless until YHC’s Pamela Diokpara tied the game at 16-16 with 8:50 left in the half. A couple of minutes later, GSW’s Kris Beckham hit a three-pointer to increase the Lady Hurricanes’ lead to 23-20 midway through the second quarter before the Mountain Lions called a timeout to regroup.

Four seconds into the fourth quarter, Perry hit a three-pointer, starting a 25-point quarter for the Lady Hurricanes. Towells hit another three-pointer to put GSW up 70-53. At that point, the game was out of reach for the Mountain Lions as GSW got their third PBC win of the season.

The Lady Hurricanes will travel up the road to Columbus on Wednesday, January 16, where they will take on Columbus State. Tip-off is scheduled for 5:30 p.m.