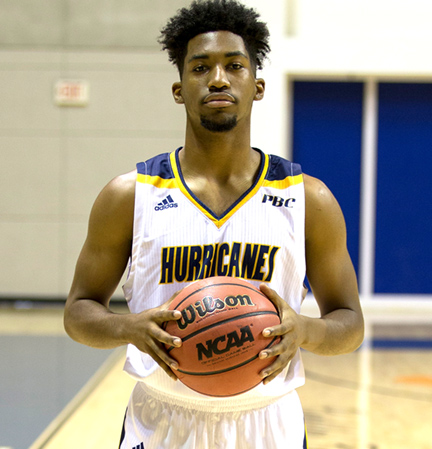 GSW freshman guard Grant Howard had the best game of his young collegiate career as he scored 20 points in the Hurricanes’ 100-97 loss to Young Harris College. Photo by GSW

AMERICUS – GSW freshman forward Grant Howard turned in the best performance of his collegiate career, but the Georgia Southwestern State University men’s basketball team was unable to get the win as they lost to Young Harris College 100-97 on Saturday, January 12, at the Storm Dome.

Howard scored 20 points and was the team leader in rebounds with eight. He also tallied six assists.

For the third game in a row, the Hurricanes went into halftime with a lead. GSW senior guard Devin Watson had a tremendous first half as he made 6 of 8 shots, including 4 of 6 from beyond the arc. Watson posted a total of 21 points in the losing cause.

GSW took a nine-point lead with 13:15 left in the second half when Howard hit a jumper to make the score 74-65 GSW.

In addition to Howard and Watson, senior guard R.J. Sessions scored 17 points coming off the bench for the Hurricanes. Brian Harper led YHC with 21 points and Alphonso Willis poured in 20. Reigning PBC Player of the Year Justin Jones was held to just eight points behind 2 of 15 shooting.

The Hurricanes will try once again to stop their current losing streak and earn their first PBC win of the season when they travel to Columbus, GA to take on Columbus State on Wednesday, January 16, at 7:30 p.m.