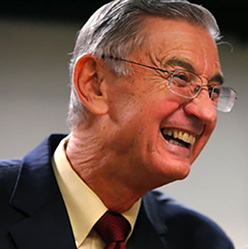 AMERICUS — A decade after the unexpected death of Millard Fuller, The Fuller Center for Housing will host an event at historic Koinonia Farm, 1324 Ga. Highway 49 South, Americus to remember the man who gave away his riches to dedicate his life to serving others — specifically by launching the world’s affordable housing movement.
Fuller died unexpectedly on Feb. 3, 2009, at the age of 74 from an aortic aneurysm, having
dedicated four decades of his life to helping families have simple, decent places to call home —
first through the founding of Habitat for Humanity and later through The Fuller Center. For his
tireless efforts, he was honored with the Presidential Medal of Freedom by President Clinton and
with a medallion on the Extra Mile Points of Light Pathway in Washington, D.C., also featuring
wife Linda. President George H.W. Bush presented that honor.
Friends, supporters and family — including Linda Fuller — will gather at historic Koinonia
Farm at 1:30 p.m. for a light lunch before making the trek to the farm’s Picnic Hill where Fuller
is buried in an unmarked grave near theologian Clarence Jordan, who founded the farm and
inspired Fuller with the concept of partnership housing that formed the basis for Fuller’s housing
ministries. There will then be time for sharing remembrances of Fuller.
The event is free and the public is invited, but reservations are required. The Fuller Center asks
those wishing to attend to RSVP no later than Jan. 25. You can contact The Fuller Center at 229-924-2900 or get information online at FullerCenter.org