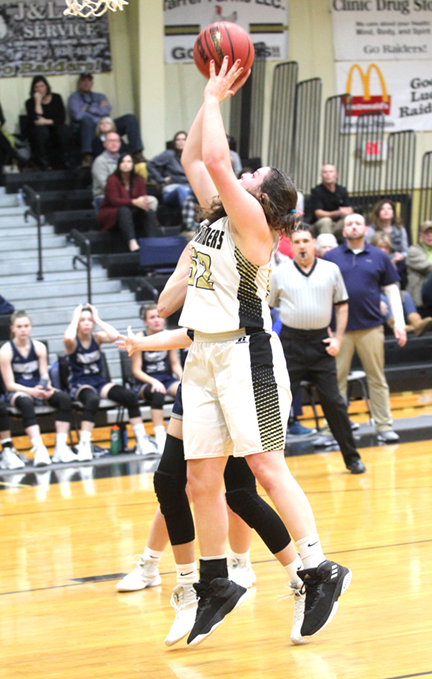 Southland’s Riley Mitchell goes up for a layup. Photo by Sheri Bass

AMERICUS – After a disappointing 32-28 Region 3-AAA loss at Deerfield-Windsor on Saturday, January 12, the Lady Raiders of Southland Academy (SA) came into Tuesday night’s game against Brookwood poised to get back in the win column and move up the Region 3-AAA standings. They did just that as senior point guard Sydney Payne spearheaded a 12-0 run in the second half to lead the Lady Raiders to a 49-31 victory over the Brookwood School (BS) on Tuesday, January 15, at Southland Academy.

Payne led SA with 19 points and Holly McCain scored 11 in the winning cause. Macy Williams contributed nine points to help the Lady Raiders earn the victory. For the Lady Warriors, they were led in scoring by Jordan Thompson with 13 points. Both Holland Walker and Ann Murray Jackson chipped in seven points for the Lady Warriors.

Southland head coach Ty Kinslow was extremely proud of his team for the way they played. He was especially proud of the younger players who contributed in the absence of sharpshooter Calyn Fort, who missed the game due to sickness. “Our younger players did a great job stepping up, being that Calyn Fort was out,” Kinslow said. Kinslow also praised the efforts of Payne in her scoring and leadership on the floor.

The first half was a tightly-contested half between both teams, with BS leading 19-15. Riley Mitchell scored to pull the Lady Raiders to within two with under a minute to go. With 35.4 seconds left, Payne was fouled and hit one of two free throws, cutting the deficit to 19-18 Brookwood at the half. 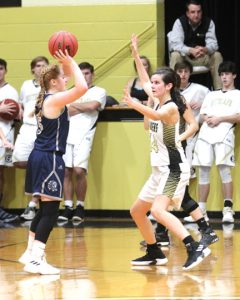 The Lady Raiders struggled to score coming out of the gate in the second half. They were trailing 21-18 until Maddie Crisp was fouled and hit one of two free throws. The good news for SA was that the Lady Warriors were having difficulty scoring as well. The Lady Raiders took the lead on a Macy Williams three-pointer with 4:18 left in the third quarter. Payne scored to give SA a 24-21 lead when she drove baseline and scored with three minutes left. Then at the 2:50 mark of the third quarter, Payne struck again as she scored to give SA a 26-21, prompting a timeout by BS.

The Lady Warriors began to apply full-court pressure, but the Lady Raiders were able to break it. Ally Dent and McCain scored back-to-back baskets to give SA a 31-21 lead. This was part of a 12-0 run by the Lady Raiders to give themselves a 10-point cushion by the end of the third quarter.

The Lady Warriors continued to be cold from the field early on in the fourth quarter. This gave SA the opportunity to extend their lead. However, they had difficulty scoring as well. Both teams were missing easy layups on the inside. However, with SA leading 34-26, Crisp rebounded a missed layup by Payne and scored to put the Lady Raiders back up by 10.

SA was able to regain possession, and Crisp was fouled while shooting. Crisp missed the front end of a one-and-one, but the Raiders got the ball back. Payne scored again as she drove to the basket to give SA a 38-26 lead. With three minutes left in the game, the Lady Raiders began implementing a “four corners” style of offense: moving the ball around the perimeter to run clock. McCain was able to score after several seconds had run off, prompting another time out by the Lady Warriors.

The Lady Raiders will continue region play when they host Valwood on Friday, January 18, at 6;30 p.m.

AMERICUS – The Southland Academy Raiders were hoping to bounce back from a tough loss at Deerfield-Windsor on Saturday, January... read more