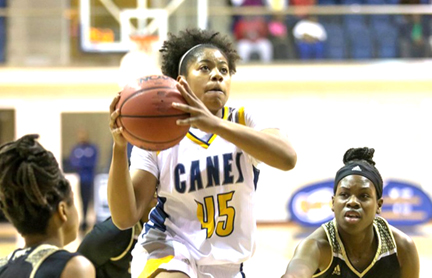 The score was tied 71-71 with 1:44 left in the game. GSW junior guard Morgan Towells was fouled and went to the free-throw line. She sank both foul shots to give the Lady Hurricanes a two-point lead. On CSU’s next possession, Lele Young blocked a shot and the Lady Hurricanes got the ball back. Towells was fouled and drained two more free throws to increase GSW’s lead to 75-71.

With 38 seconds left in the game, the Cougars closed the score to one possession. They then forced another turnover and scored to tie the game at 75-75 with 20 seconds left. Trimble scored on GSW’s next possession to regain the lead for the Lady Hurricanes. After a missed shot by CSU, Young grabbed the rebound and was fouled. The Gainesville, FL freshman guard made one of her two foul shots, but it was enough to earn GSW the win..

The Lady Hurricanes came out strong to start the second half. They built a 39-30 lead with 6:34 left in the third quarter. As time went on, the CSU defense showed up and kept the Lady Hurricanes from going on any more scoring runs. However, Towells was hot from beyond the arc in the third quarter. She hit two three-pointers in the quarter and scored a total of 10 third-quarter points. By the time the fourth quarter began, GSW had a 54-50 lead. GSW would go on to win 78-75 thanks to some clutch free-throw shooting down the stretch.

Towells finished with 19 points and three assists to help the Lady Hurricanes earn the win. Chatman scored 12 points and grabbed five rebounds in the winning cause.

Both Young and Jamesha Samuel scored eight points off the bench for GSW. Young, who is five-feet tall, pulled down eight rebounds. Leeaysia Williamson led the Cougars with 15 points.

The Lady Hurricanes will try to keep their winning streak going when they travel to Florence, SC on Saturday, January 19, to take on the Lady Patriots of Francis Marion University (6-5, 3-4 PBC). Tip-off is scheduled for 1:30 p.m.