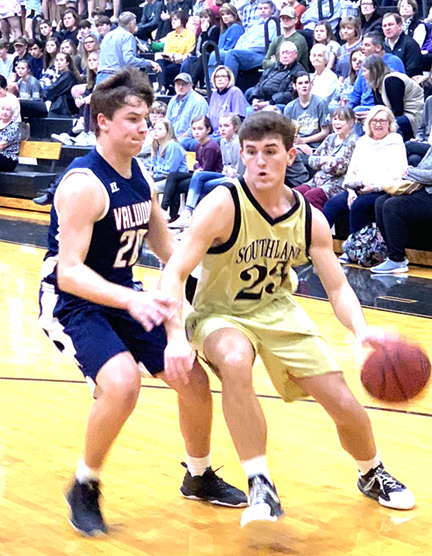 Southland guard Luke Law driving baseline to the basket. Law hit a three-pointer in the first quarter for the Raiders. Photo by Ken Gustafson

AMERICUS – It was a game in which both teams fought to win as if their lives depended upon it. It was everything one would expect in a region or state championship, except this was simply a regular-season region game between the Southland Academy Raiders and the Valiants from the Valwood School (VS) in Valdosta. As in all games, someone had to win and someone had to lose. Unfortunately for the Raiders, a basket by Valwood’s Allen Harris with 11 seconds to go, coupled with some missed free throws by the Raiders down the stretch, resulted in a 55-54 heartbreaking loss for the Raiders in this GiSA Region 3-AAA contest on Friday, January 18, at Southland Academy (SA).

The three-point shot played a large role in this game. Both teams made a combined 15 three-pointers. VS made eight while the Raiders made seven from beyond the arc.

Free-throw shooting plays a role in all close games. This game was no exception. The Raiders made 7 of 16 free throw attempts while the Valiants made 11 of 22.

Things started out rough for the Raiders as the Valiants jumped out to a 9-3 lead, capped off by a three-pointer by Harris. This prompted Southland head coach Rundy Foster to call a timeout.

Out of the timeout, Studdard nailed a three-pointer to bring the Raiders to within three. 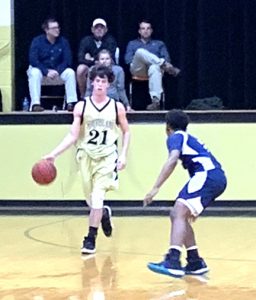 Luke Law then found Studdard on the inside. Studdard scored and was fouled. He wasn’t able to complete the three-point play, but the Raiders were back in the game, trailing 9-8. Owen Hufstetler scored to give the Raiders the lead at 10-9.

Both teams traded baskets for the remainder of the next minute or so until Max Foster nailed a three-pointer to give SA a 17-13 lead. Foster scored again when he hit a jumper and was fouled. He made the free throw, giving the Raiders a 20-13 lead by the end of the first quarter.

Then with 2:44 left in the first half, Cooper was fouled and made both free throws to bring Valwood to within one at 28-27. Hunter McCain responded for the Raiders by scoring on the inside, increasing their lead back up to three at 30-27. The Valiants scored three unanswered points to tie the game at 30-30, but Roland was fouled and sank both free throws to give the Raiders a 32-30 lead.

With 40 seconds to go in the first half, and the game tied 32-32, SA decided to hold for the last shot. With eight seconds left, Landon Law drove baseline and scored. The Raiders were able to get the ball back seconds before halftime. At the halftime buzzer, James Griffin hit a three-pointer to give SA a 37-32 halftime lead.

Studdard led the Raiders in first-half scoring with 12 points. Six of those points came on three-pointers. The Raiders hit six shots from beyond the arc in the first half.

Blaine Cooper and Allen Harris each scored six points to lead the Valiants in first-half scoring. Both of them scored their points on three-pointers. The Valiants hit five shots from beyond the arc in the first half. 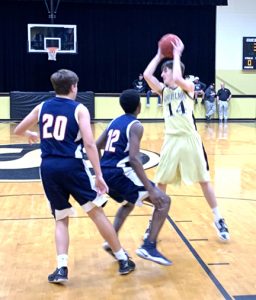 The Valiants went on a 10-4 run to start the third quarter while the Raiders were struggling to score. However, Max Foster put the Raiders back in the lead with a three-pointer. At this point, SA led 44-42 with 41 seconds to go in the third quarter. However, as the seconds were winding down to end the quarter, Harris created a steal and scored for the Valiants at the buzzer to tie the game at 44-44 going into the fourth quarter.

The Raiders scored the first three points of the fourth quarter, capped off by a dribble-drive basket by Hufstetler to give SA a 47-44 lead. After a timeout, Studdard scored on the inside to increase the Raiders’ lead to 49-44 with a little over five minutes left in the game.

With 3:43 to go, SA led 49-46, but Foster called timeout to settle his club down. It seemed to work as Studdard scored right out of the timeout to give the Raiders a five-point lead. However, the Valiants weren’t going quietly as Cooper hit another three-pointer. Cooper struck again with another three-pointer to tie the game at 51-51 with 2:29 to go. This prompted another timeout by Foster.

However, the Raiders responded as Hufstetler scored on the inside and was fouled. However, he was not able to complete the three-point play. The Raiders got the ball back and moved the ball around for several seconds before Nathan Duke was fouled. However, Duke missed the front end of a one-and-one, giving the Valiants an opportunity to tie the game. They did just that when Harris scored and was fouled. However, he missed the free throw which would have given VS the lead. With the score tied 53-53, Duke was fouled again. He made the first free throw but missed the second. Then with 11.1 seconds left, Harris drove through the lane and scored to give VS a 55-54 lead.

The Raiders still had 11.1 seconds to score a winning basket, but they turned the ball over with one second left. The Valiants inbounded the ball by throwing a long pass. It was intercepted by Studdard, but his desperation prayer for a miracle fell short, leaving the Raiders with a crushing 55-54 loss.

Fortunately for SA, they won’t have much time to mourn over the loss. They travel to Perry, GA on Saturday, January 19, for a non-region contest at Westfield. Tip-off is scheduled for 6 p.m.

As of right now, the Georgia High School Association (GHSA) has seven athletic classifications. Actually, if you include the Class... read more